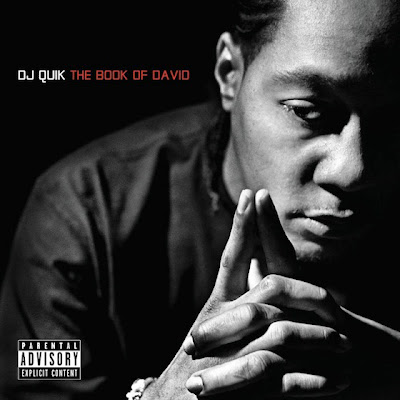 Dj Quik offers another buffet of G-Funk, R&B and Gangsta swagger on his eighth set entitled The Book of David.  The album is musically compatible with the rest of his post Rhythm-al-ism catalog, though it never quite reaches the highs of that classic.  Still, it presents Quik as an artist who ventures more willingly into true musicianship than perhaps any other rapper/producer in history.
Soothing jazz keyboards and incessant humming unfold to the clattering of junkyard band style drums on “Fire and Brimstone.”  It starts out rough but smoothes out real nice.  “Do Today” features Jon B and coasts along on an intergalactic groove that travels well below light speed.  A militant strut smothered in subtle oozing keyboard bass gives “Ghetto Rendezvous” a slightly confrontational feel.  Quik goes at ingrates who have squandered his hospitality.  It’s scathing, though a bit more calculated than his classic diss records.
“Luv of My Life” is a fluid ode to Quik’s enthusiasms.  It’s elegant Cali funk with bouncy keyboard bass and a sunset mood.  “Babylon” features Bizzy Bone and BlaKKazz K.K.  Bizzy recycles the chorus from Tenor Saw’s classic “Ring the Alarm.  Electrifying keys announce themselves like an invading army.  Bongos percolate quietly in the background as wind chimes twinkle.
The lounge room R&B feel of “Killer Dope” features sparse pianos and an all too obvious synthesized horn.  Quik laments the way gangsta rap has been bastardized since its 90’s heyday.  “Real Women” offsets a stomp and clap with soothing keys.  It’s mellow electro r&b meant for roller rinks.  Quik frames his search for the proper woman in a mature way that would seem beyond his brand of hip-hop.  Jon B joins in yet again, aiding the “grown and sexy” vibe.
BlaKKazz K.K.  drops by yet again for “Poppin.”  A record spins backward a la Beastie Boys classic “Paul Revere” as Transylvanian keyboards wale a devilish groove.  “Across the Map” features Underground King Bun-B and another guest spot from Bizzy Bone.  Standard NFL halftime synths are in full effect as tip-toeing keys get lost in the sonic forest.  Bizzy offers faux Raggamuffin vocal stylings.  Bun’s robust flow glowers on the track.  Rodney O, of all people, makes an appearance at the end.
“Boogie till you conk out” features Ice Cube.  An electric funk guitar meows entrancing wah-wah feedback while flutes sway in the breeze.  Cube sounds comfy here despite the refined subject matter.  It’s a true highlight.  BlaKKazz K.K. and Jon B show up yet again for “So Compton.”  It’s a serenely spacey ode to the C.P.T., and its pimpish cadence is infectious.  It sounds like a love note to L.A.’s most fabled hip-hop hotbed, as opposed to just a testimonial of its gangster.
Dwele blesses “Time Stands Still” with true Neo Soul flavor.  Dub reggae bass irrigates ambient sci-fi sound effects for this loving serenade.  “The End?” features P-Funk All Stars musical director Garry Shider doing some street corner harmonizing during the intro.  The song then transitions into a serenely dope groove.  It sends Quik cruising off into the sunset in the appropriate manner.
The ninth entry in the “Quik’s Groove” series appears as a hidden bonus track.  Whiny G-Funk synths blow through an amazing soundscape of guitars and drums.  It’s just as appealing as earlier “Quik’s Groove” numbers.
The Book of David is perhaps too consistent.  Like many recent overlong LP’s from old school rap royalty, it suffers from a repetitious and bloated playlist.  Nothing is particularly bad, but the uniformity of sound and content becomes monotonous.  “Hydromatic” and “Nobody” provide a party ambience that is better presented elsewhere on the album, though the latter devolves into an appealing trudge through the musical swamps at its end.  On the plus side, Quik’s rhymes feel a bit more spirited and colorful, as if he is no longer confined by the gangbanger mentality that characterized his image early on.
The Book of David is an appealing if imperfect chapter in Quik’s ever expanding musical gospel.  Sonically it’s too mature and refined for current tastes, but is also its greatest strength.  Unlike many of his brethren, Quik’s sound actually ages rather gracefully, and to an extent so does his content.
Posted by Unknown at 1:49 PM