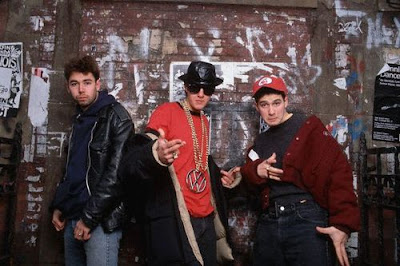 The Beastie Boys have met the enemy, and it is them.  That, in a nutshell, is the premise of Fight For Your Right – Revisited.  The 30 minute short film will accompany the release of their eighth album Hot Sauce Committee Part 2.  In the film, the present day Beasties travel back in time to antagonize the Licensed To Ill Incarnation of themselves, effectively giving their younger selves a taste of their own obnoxious medicine.

The Beasties were one of the most infamously rowdy rap groups of the 1980’s.  Their hedonistic exploits are the stuff of legend.  Since then their consciousness has grown, and they have openly expressed remorse for past behavior.  Fight For Your Right – Revisited, feels like an appropriately silly send up of that sentiment.  It’s like the comedic hip-hop equivalent of the part in Superman III where the man of steel’s id and superego face off in a junkyard.
The clip is underscored by their new single “Make Some Noise.”  Jack Black, Will Ferrell, Seth Rogen, Elijah Wood, John C Reilly, and Danny McBride star as the warring parties.  In the case of Ferrell, Black, and Rogen, a little of their shtick usually goes a long way.  However, in the wacky world of the Beastie Boys they fit right in.
New Beastie Boys albums often arrive during periods where some mundane new trend has irreversibly altered the course of popular music.  It’s almost as if they time it that way.  The trailer for Fight For Your Right – Revisited makes one wonder how Scared Shitless (an abandoned movie project that was to be made and released in the immediate wake of Licensed to Ill’s popularity) might have turned out.  It’s just as well that it never saw the light of day, as the Beasties likely would be embarrassed by now.
Posted by Unknown at 7:11 PM