A Brief Glimpse of the Digital Monkey Makeup for "Rise of the Planet of the Apes." 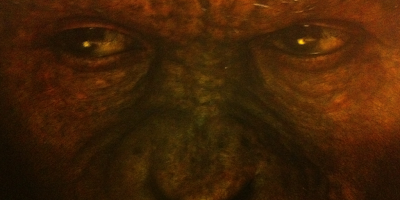 Planet of the Apes is a perpetual mainstay of fandom.  No amount of lackluster entries could ever completely diminish interest in the property.  The intriguing premise at its core continues to be a source of fascination for thoughtful sci-fi fans.  This August, 20th Century Fox hopes to entice fandom into returning to the well yet again with Rise of the Planet of the Apes.  This will be the first Apes film in a decade, the last being the nigh unwatchable reboot Planet of the Apes.
This entry will be something of a prequel, showing us how the monkey planet shown in the original came to be.  In search of a cure for Alzheimer’s, scientists begin using apes as test subjects.  The experiments result in a subject named Ceaser possessing abilities far beyond those of other primates.  A scientist attempts to protect Ceaser from those who might exploit him.  James Franco stars as the benevolent scientist and Andy Serkis will yet again done the motion capture suit for the role of Ceaser.
This will be the first entry to deviate completely from traditional makeup FX and go all digital.  Weta Digital will be handling the FX work.  A tantalizingly brief glimpse of what Weta has in store has just appeared online, and it looks about as good as can be expected.  If these FX are unfinished, the final product is sure to amaze.  New Apes films always hold the promise of cutting makeup.  The problems with past sequels and reboots have always been in the story department.  Let's hope that Rise of the Planet of Apes has developed the cure to that particular ailment.
Posted by Unknown at 2:15 PM

Email ThisBlogThis!Share to TwitterShare to FacebookShare to Pinterest
Labels: Movie News, Rise of the Planet of the Apes, Science Fiction