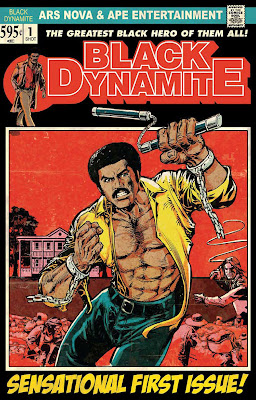 17 miles off the east coast, Noah Hicks presides over an island resort like a sinister Mr. Roarke.  This particular island rendezvous allows its visitors to live out fantasies of a much darker variety.  It’s actually a giant plantation where slavery is still very much in effect.  When Black Dynamite catches wind of what’s going down, he makes a trip out to Slave Island with his sights set on putting foot firmly to ass.  What he encounters there is the stuff of nightmares.
As if the cinematic incarnation of Black Dynamite wasn’t enough of a comic book hero, the good folks at Ars Nova and Ape Entertainment now bring us the “sensational first issue” of Black Dynamite.  Like the film, it is simultaneously a throwback as well as a loving parody.  It’s very careful to remain faithful to every detail of the superhero comics of the 1970’s, particularly the ones that featured black heroes inspired by characters in black exploitation films.
The cover is actually a tribute to (or a direct facsimile of) the cover for the very first issue of Marvel Comics Luke Cage, Hero For Hire, which was originally published in June of 1972. It’s nearly identical to the original in every regard, from the style of the artwork and the lettering to the colors used.  The similarities don’t end there, as the actual content of the book very easily could have been featured as a ham-fisted form of social commentary in one of Marvels titles from that period.
Jun Lafamia’s artwork evokes that of the era.  All of the colors have a slightly faded/washed out look the likes of which hasn’t been seen in decades.  They almost look like they were printed on the old fashioned pulpy paper that was used before the shinier, glossier brand became the standard.  Lafamia’s work is detailed, but subdued.  It isn’t the hyper stylized brand of art that younger readers are likely accustomed to. 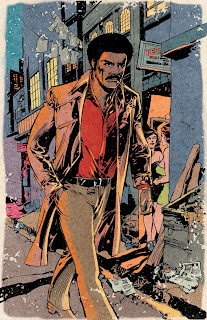 The story by Michael Jai White, Byron Minns, and Scott Sanders is right in line with that of the film.  It could easily be the basis of a prequel or a sequel.  Instead of aping the plot of Black Belt Jones as the film did, the comic uses the structure of Enter the Dragon and Dr. No.  Black Dynamite makes a trip out to “Slave Island” to investigate after one of the Slaves escapes and reaches the mainland.
Writer Brain Ash has clearly done his homework.  He includes some very obvious but still hilarious references to The Warriors and Superfly.  Black Dynamite hurls racist insults at villains that would only be deemed acceptable in the world of blaxploitation.  Ash has the dialogue and voice over narration down pat.  In a very amusing touch, the book also includes some fake ads that mimic the ones found in 70’s comics. 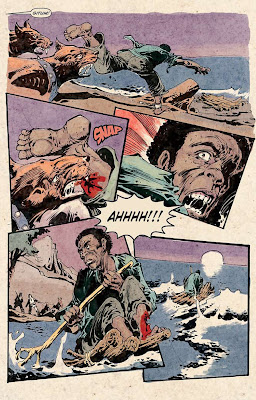 Black Dynamite: Slave Island does a good job of creating a convincingly retro experience that will play extremely well to fans of the film.  It will probably leave outsiders a bit cold as those with no point of reference won’t really be able to appreciate the art, humor or style of storytelling.  Chances are that if you remember going to the neighborhood newsstand or the local drive-in anytime during the 70’s, you’ll be able to recognize and appreciate the experience of Black Dynamite: Slave Island.
Posted by Unknown at 6:49 PM