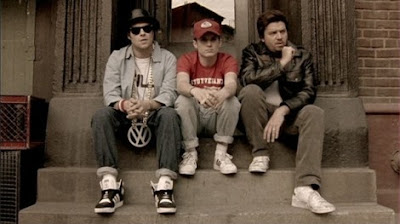 After trashing an apartment during a wild party, the Beastie Boys decide to paint the town red. In the middle of their drug and alcohol fueled rampage, they run into the future version of themselves.  The confrontation culminates in a dance competition between both incarnations of the group.  Bizarre hilarity ensues.

The world of the Beastie Boys has never made a hell of a lot of sense.  Both their music and the accompanying videos have always reflected this.  They represent the irreverent side of Hip-hop that got lost during the Golden era.  Their upcoming LP Hot Sauce Committee Part Two presumably continues this trend, as does their new short film Fight For Your Right (Revisited), which also doubles as a long form video for their new single "Make Some Noise".
The song itself inspires instantaneous head nodding.  Feedback from an electric guitar is arranged into a series of stabs that energetically bounce down the block.  The drums are vintage boom-bap, made to induce endless freestyles.  I have no idea what the song is about, nor do I care.  It causes an involuntary B-Boyish reaction in me that I have no desire to suppress.
It’s really hard to critique this film in any real way, as it moves haphazardly from one bizarre set-piece/joke to the next with the dexterity of a Family Guy episode, only much more surreal.  The clip begins with an amusing opening credits sequence where the words appear on the underside of the steps on a staircase in an apartment.  Ad-Rock (Elijah Wood), Mike D (Seth Rogan), and MCA (Danny McBride) emerge from a smoke filled apartment as “Fight For Your Right” blares loudly.

There is a slightly Kubrickian moment in a restaurant, complete with Cameos by Ted Danson and Steve Buscemi among others.  There is a real cool strobe effect that takes place during the acid trip segment, which is underscored by a chopped and screwed version of “Make Some Noise.”
There are also some bits that had me laughing despite my disdain for modern “frat boy” humor.  The unbelievable dialogue when the older beasties emerge from a time traveling DeLorean to confront younger ones is funny as Hell.  It’s a bunch of nonsensical old school hip-hop jargon issued as a challenge.  The dilemma that of removing the dance mat from the roof of the car is also funny.    The dance contest that turns quite literally into a pissing match is a pretty great shock humor moment that tested my limits upon first glance.
I was anticipating that the shtick of the comedic personalities involved would be a bit less grating, and I was mostly right.  Elijah Wood, Seth Rogan and Danny McBride go about their roles matter of factly.  They aren’t remotely reminiscent of the 1986 Beastie Boys, nor do they try to be.  They take their cues from the group’s music, freestyling through the whole thing.  The same goes for Will Ferrell, Jack Black and John C. Rielly.  The endless cameos and walk-ons are noticeable but not intrusive
When all is said and done, I haven’t a clue what to make of Fight For Your Right (Revisited).  Some of it’s legitimately funny.  Some of it’s morbidly fascinating.  Some of it’s just odd.  At the end of the day, I didn’t feel like I wasted 30 minutes of my life and I am looking forward to the new album.  Will that be enough to win over the non believers?  I highly doubt it, but as a good friend of mine always says, it is what it is.
Posted by Unknown at 7:42 AM