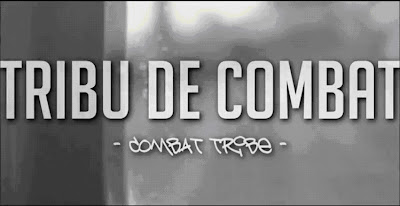 Malik Dupont (Alex Martin), appointed leader of “the tribe,” has returned home after the death of his younger brother Alan.  He confronts his friend and fellow tribesman Sebastien Shaw (Kevin Lukata), hoping to get some closure on the matter. Sebastian served as leader in Malik’s absence, and was charged with looking after Alan.  During the course of a heated exchange, Sebastien drops a bombshell on Malik that causes all Hell to break loose.
Combat Tribe takes place in a setting so mundane that it does not telegraph the ensuing fight scene.  It could just as well be a moment from a telanovela or an after school special.  Despite Kevin Lukata’s muscular frame, nothing about his demeanor suggests that he is chomping at the bit for a fight (despite the fact that he is in the middle of workout).  Of course, as the dialogue progresses, it’s obvious that a fight will undoubtedly take place.  It’s still a nice touch that the clip doesn’t tip its hand right from the beginning.
Again, R.L. Scott shows skill at establishing a situation quickly, and letting the story tell itself.  The audience has no clue as to the prior history between these two characters or what “the tribe” actually is, but it ultimately doesn’t matter.  Enough information is provided in the time allotted to get the viewer involved.  This is a trick that so many of today’s action filmmakers have forgotten.  The quicker you establish your world and your characters, the quicker you can get down to business.
The fight itself gains a lot from the backyard setting.  Malik and Sebastian engage in some grappling on a skateboard ramp.  The sound effects have a nice deep “thud” to them, giving the impression of knuckles impacting flesh.  These guys look like they are really trying to hurt each other.  It has the feel of a schoolyard scrap between two angry kids, as opposed a skillful contest between two martial artists.  It’s a good example of how a fight scene can convey emotion and tell a story in and of itself.  The music by Disiz La Peste has an understated moodiness and aggression that that ends things on an appropriate note.
This is the first episode in a series that will feature characters from all over the world, possibly providing viewers with a look at different “tribes” from different hoods.  R.L. Scott continues to do more with less, providing compelling action spectacle with virtually non existent resources.  I have yet to be disappointed with anything I have seen from him, and I look forward to finding out if he is able to maintain this level of quality for the duration of a feature length film.