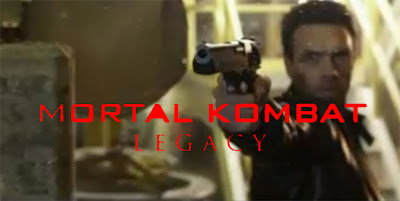 Deacon City police lieutenant Sonia Blade (Jeri Ryan) has tracked Kano (Darren Shahlavi) to a factory where robotic weaponry is being readied for immediate shipment.  Kano sits at the head of the Black Dragon crime cartel, an organization that the authorities have been after for quite some time.  Sonia relays the intel to Captain Jackson "Jax" Briggs (Michael Jai White), who immediately mobilizes the cavalry.  As Jax races to Sonia’s aid, a firefight is inevitable.
From the outset, Mortal Kombat: Legacy has the feel of a summer action movie.  The look and atmosphere are reminiscent of Michael Bay’s Bad Boys films.  Writer/director Kevin Tancharoen splits the run time evenly between the setup and the fireworks.  The action begins at the 5:37 mark and lasts until the end credits roll.  He establishes the situation and throws the characters headlong into it.

Much of the character development is delivered via brief expository dialogue.  Characters speak on past encounters with other, but there are no convenient flashbacks.  Many of the standard cop movie clichés are in full effect, with the hot headed Jax disregarding protocol to save a dear friend.  Some of the dialogue plays as unintentionally funny, mostly because of the deadly seriousness with which it’s delivered.
Darren Shahlavi chews every bit of scenery in sight, and even engages in some shockingly brutal violence against Sonia.  A villain who revels in sadistic misogyny is a time honored tradition of R-rated action films.  Darren Shahlavi’s performance is fun when viewed through the prism of extremely heightened reality.
The action offers an abundance of both gunplay and fisticuffs, with the shootout acting as an appetizer.   The fights are composed of medium shots that cut off combatants at the waste, showing only upper body movement.  There are a couple of moments where gun shot wounds result in startling blood spatters on the camera lenses.  The only place where the seams show is the use of CGI blood sprays that emanate from the bullet holes.
This first episode of Mortal Kombat: Legacy works on a meat and potatoes level.  Its ambitions aren’t exactly lofty, but they don’t really need to be for this kind of material.  This is meant to be slick and easily digestible.  Those who are familiar with the conventions of the cop film will appreciate the callbacks to that genre.  Casual viewers will likely push all of those elements to periphery and enjoy the action.
Posted by Unknown at 1:30 AM