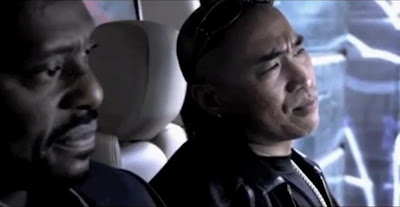 I have an unabashed love for Blood and Bone that borders on obsession.  One of my very few complaints regarding its DVD release is the lack of “real” extras save for a commentary track.  Perhaps sensing the collective frustration of fans such as myself, director Ben Ramsey has decided to throw a proverbial bone (pun intended) to us B&B cultists.
One of the coldest moments in the movie is when the villainous James (Eamonn Walker), who is being chauffeured around town by his lackey Teddy D. (Ron Yuan), turns their vehicle into a murder weapon.  James forces Teddy’s foot into the gas pedal by pressing on his right knee, effectively smashing teenaged hooker Monique (Jontille Gerard) against the wall behind her like a pesky housefly.  As it turns out, there was a bit of comic relief that was to take place immediately after that brutal moment.
In an extended scene released just yesterday via YouTube, James and Teddy engage in a brief exchange just after the murder.  They discuss the difference between a woman being “cute” or “fine.”  They also pit neo-soul favorites D’Angelo to Maxwell against each other in humorous comparison.  The moment further shows off James’s love and knowledge of music, which was hinted at in a key scene earlier in the film.  The dialogue is funny, and definitely sounds like fodder for barbershop conversation.  I can understand why it was cut, seeing as how it slows down the momentum between the killing and an important moment that occurs just after.  Still, the clip is pretty amusing in and of itself.  Enjoy.
Posted by Unknown at 10:47 PM