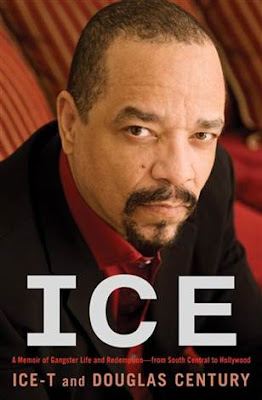 Over the last quarter century, Ice-T has slowly transitioned from being one of Hip-Hop’s earliest and most successful provocateurs to one of its most transcendent and recognizable personalities.  Amazingly, that transition has never been formally chronicled save for a few magazine interviews and the like.  Ice: A Memoir of Gangster Life and Redemption-from South Central to Hollywood attempts to tell the story of Tracy Morrow in a way that will speak to the converted and skeptics alike.  It does so in what has been a very productive period for the ever expanding cannon of serious hip-hop literature.

Ice, which Ice-T wrote in conjunction with Douglas Century, is both a memoir and a personal diary.  Ice-T doesn’t use this opportunity to offer endless testimonials of his gangster.  He offers insight into his childhood and other periods of his life that he had never previously expounded upon.  Before there was Ice-T there was Tracy Morrow, A young child living an uneventful existence in New Jersey.  The stage persona of Ice-T was born when the preteen and newly orphaned Morrow relocated to South Central Los Angeles and became involved in a side of life that he would later expose to the larger world.
By now, the exploits of the Bloods and Crips have become as much of a hip-hop cliché as gaudy Jewelry.  Countless rappers claim affiliations with one gang or the other in bid to tantalize fans.  Ice gives some insight in the early years of L.A. Gang warfare, before crack cocaine transformed both gangs into violent militias with a number of time honored traditions.  Ice does this by first distinguishing himself as an affiliate rather than a hardcore participant.  Almost everything Ice relates to the reader is filtered through that sort of detached perspective, even when he is talking about his own experiences and actions.  Ice-T offers a form of introspection that starts from well outside of his own mind.  He sees himself from the outside in.
Ice-T also tells us about his experiences in the military and the criminal underworld.  The latter will likely be the main point of interest for many readers.  In the past, Ice has offered scant evidence as to the authenticity of his hardcore image or his gang ties.  While the tales that Ice spins in this book are wild indeed, none of them seem outlandish or unlikely.  They are exciting while remaining completely plausible.  We don’t get stories of murders, drive-bys or kilos of cocaine being flipped.  Still, Ice has seen a lot and done a lot, probably way more than any of his peers (Many of whom have always been more eager to talk about their pasts).
The best of Ice-T’s music has always been able to balance blatant romanticism with grim reality.  He offered his listeners a moral with every story, but amazingly managed to never come off as preachy.  He does the same here, but in a much more extensive and detailed manner.  He and Douglas Century strike a skillful balance between street knowledge and world knowledge, street parlance and proper english.  Ice often gives off the impression that one is hearing from an ex-hustler who managed to save his money, retire from the game and then go to college.  His thoughts are surprisingly clear and based more in logic and reasoning than one would think.  The parents that were once horrified by his lyrics and image would likely be shocked at how much of Ice they’d end up agreeing with.
I picked up Ice: A Memoir of Gangster Life and Redemption-from South Central to Hollywood on an impulse buy in Barnes & Noble.  It’s a surprisingly fun and substantial read.  It doesn’t weigh the reader down, but instead carries them along.  It shows that hip-hop literature can be both serious and enjoyable.  Ice-T has a lot more on his mind than his stage persona would lead people to believe.  He actually has some jewels to share.  If you don’t partake in them, he likely doesn’t give a fuck.  Though he has a heart and a conscience, he still has the spirit of a true hustler.  He’s not about to stop his grind because a few squares are too snobby to peep game when a true player offers it.
Posted by Unknown at 7:06 PM