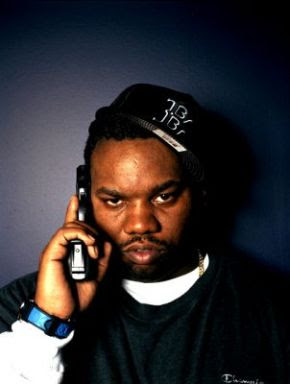 Rappers love revolution, at least in concept.  Politically conscious rappers especially will advocate just about any historical figure that appears to have taken it to the man.  Ernesto "Che" Guevara and countless others have been lionized by Hip-Hop at one point or another.  Criminal figures like Ellsworth “Bumpy” Johnson and countless Cosa Nostra bosses have also been unofficially elevated to the status of “revolutionaries” if only because their violent criminal activities fly in the face of polite societies values.  Rappers, like Americans as a whole, tend to have selective memory when looking back at history.  This causes certain historical figures to be assigned a significance that is not befitting them.  Sometimes that tendency borders on lunacy, as truly evil men are allowed to be heroes. 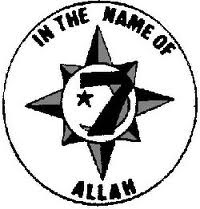 Rappers affiliated with the Nation of God’s and Earth’s (aka the Five-Percent nation) have often advocated a staunchly anti-establishment stance.  The group was founded in Harlem in 1964 by Clarence Smith, better known as Clarence 13X .  He started the organization after parting ways with the Nation of Islam. Five percenters believe themselves to possess vital knowledge of the true nature of God, man, and the universe.  They also believe that the corrupt ten percent of the population that controls the world’s wealth and knowledge keeps the remaining 85% percent in mental, spiritual and economic poverty.  Rakim, perhaps the first rapper to truly popularize the teachings and terminology of “God bodies” took advocating America’s supposed enemies to a shocking extreme in his classic “Casualties of War”:
Go to the Army, be all you can be
Another dead soldier?  Hell no, not me
So I start letting off ammunition in every direction
Allah is my only protection
But wait a minute, Saddam Hussein prays the same
and this is Asia, from where I came
I'm on the wrong side, so change the target
Shooting at the general; and where's the sergeant?
Blame it on John Hardy Hawkins for bringing me to America
Now it's mass hysteria
I get a rush when I see blood, dead bodies on the floor
CASUALTIES OF WAR!
The song was released in 1992, well after Desert Storm.  Had Rakim been a higher profile recording artist (and olitically conscious rap a higher profile subgenre), it surely would have stirred up a hornet’s nest of controversy.  But it went relatively unnoticed by the mainstream.  At the time, it was admittedly a powerful verse, and its sentiment had a profound impact on my 15 year old mind.
I was reminded of that song recently after coming across a snippet of an unreleased cut by Raekwon entitled “Footprints of Osama” that chronicles the life and rise of the Al Qaeda leader.  Raekwon is one of the most respected members of the Wu-Tang Clan, who have always promoted Five percent doctrine.  Before listening, I prayed that Rae was not doing the same thing with Osama that Rakim had done with Saddam.  He claims that Osama “didn’t hate America, he hated the congress.”  Then I heard the line at the tail end of the snippet: ”War hero legendary for the Muslims by any means/reminds me of Farrakhan, Malcolm, and King”.  For me, that is easily worse than when Ice Cube named himself “Young Osama” on the second Westside Connection album.
While I am tempted to defend the song as an unbiased and/or alternative look at Bin Laden, my instincts tell me different.  I have not heard the song in its entirety, but what I have heard leans toward glorification in my opinion.  I hope that if the completed version ever emerges, I will be able to reassess my judgement.
In a sense, it’s all part of Hip-Hop’s logical progression for anyone who’s been reading the signs.  New York rappers have long been affiliated with the Nation of Gods and earths.  Public Enemy and Ice Cube openly glorified Louis Farrakhan on many occasions during the late 1980’s and early 1990’s.  The spirit of the Black Panthers lived on in the work of both Public Enemy and even N.W.A’s early recordings.  The Coup and Immortal Technique can also be counted in that bunch.  In the last 15 years, the concept of the New World Order and the Illuminati entered the Hip-Hop Lexicon thanks conspiracy laden tomes like William Cooper’s Behold a Pale Horse.
I don’t necessarily dismiss the ideas propagated by the aforementioned artists, organizations and authors.  All of the rappers mentioned are among my very favorites, and I have great respect for the legacy and achievements of the Panthers.  I don’t advocate Farrakhan or the NOI wholeheartedly, but I’d be a fool to dismiss all of their ideas outright.  However, there are moments where the “revolutionary spirit goes too far.”
America has a lot of blood on its hands.  That cannot be denied.  But in this case, the enemies of our enemies are not our friends. Men such as Osama and Saddam have a history of persecuting their own people, just like the slave owners who founded this country and the power brokers who continue to run it.  They do so under the guise of a holy calling.  The way to undo the seemingly irreparable damage that the United States has inflicted upon its minorities is not by advocating terrorists.  Just as America needs to start choosing better heroes, so do rappers.  Everyone who undermines or challenges the system is not a hero.  Everyone who dies at the hands of a mighty empire is not necessarily a martyr.  Let us not side with a villain in order to vanquish the ones under which we live.
Posted by Unknown at 6:58 PM