First Image of Bane from "The Dark Knight Rises" 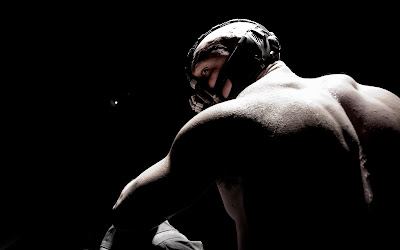 Filming on Christopher Nolan’s third and final Batman film, The Dark Knight Rises, began last week.  As with his other two installments, I wondered how the villains would be visualized.  The inclusion of Bane into Nolan’s hyper-real universe struck me as odd when it was announced.  The character, as rendered in the comics, seemed a bit too typically “comic book” for the Nolan aesthetic.  This was mostly due to his gargantuan size.  The casting of Tom Hardy didn’t do anything to assuage my doubts.  Still, a friend of mine (who has an annoying penchant for being right much of the time) encouraged me to reserve judgment until more substantial info became available.
This morning, Joblo.com unveiled the first official image from the film (seen above and below), which just so happens to be a shot of Tom Hardy as the roid-raging menace.  It’s a shot of him from behind, sitting in the darkness.  His skin is extra pale, and his mask resembles some sort of sinister breathing apparatus.  I am assuming this particular shot shows him at “normal” size, before he pumps up.  He isn’t an impossibly muscled behemoth, but he does indeed look freakish.  That puts him in good company with the rest Batman’s rogues gallery as envisioned by Nolan.  I can actually picture this character populating the same cinematic universe as Heath Ledger’s Joker.  As usual, Chris finds a way to make it work.  I should have known better than to doubt him.