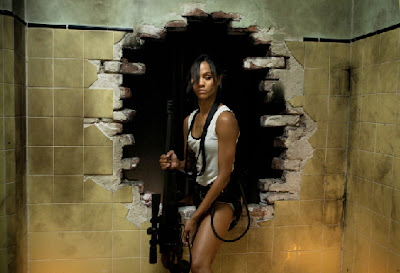 Men can sometimes become consumed by their enthusiasms.  Two of mine are action films and beautiful women of color, both of which take up considerable volume in my brain.  I imagine that filmmaker Luc Besson isn’t all that different.  He is fascinated with the concept of the super assassin, so much so that almost every film he as ever written, directed, or produced has been a variation on that concept.  As if through a Vulcan mind meld, he has found a way to merge my obsessions with his own.  The result is the very simply titled Colombiana.
In Colombiana, the always lovely Zoe Saldana plays a young woman who has transformed herself into a deadly huntress.  At a very tender age, she witnessed the slaughter of her parents in Bogota, Columbia.  Since that unfortunate tragedy, she has become well versed in the warrior arts.  Her uncle employs her as his personal hitman, but she also moonlights as an urban vigilante.  That endeavor is not without purpose; she hopes to one day topple the gangster responsible for the murder of her parents. 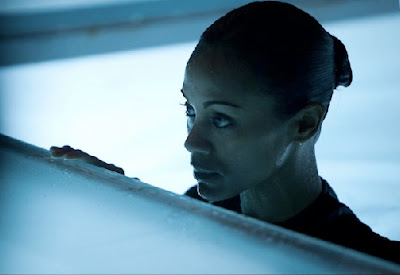 Colombiana is but the latest film to feature a petite beauty as an assassin.  Salt and most recently Hanna have also centered on young femme fatales.  Such films simultaneously cater to the fantasies of both male and female viewers.  The guys get to salivate over a hot chick that kicks wholesale ass, while the women get to feel empowered.  It’s a brilliant marketing strategy, but it does ignore a very obvious truth: lightweight women are highly unlikely to defeat 200 pound men in unarmed combat.  Boxing has weight classifications for a reason.
Colombiana was written by Luc Besson and Robert Mark Kamen.  Kamen is a Hollywood vet that has done scripting duties on many Besson productions over the last decade, including the surprise hit Taken.  He was also behind the screenplays for the increasingly cartoonish Transporter films.  Olivier Megaton sits in the director’s chair.  He also has prior experience working for Besson, having directed Transporter 3.  Considering the talent behind the camera, it anybody’s guess how the film will acutally turn out.  Leon: The Professional and La Femme Nikita are unmitigated classics, but Besson’s track record isn’t exactly flawless. 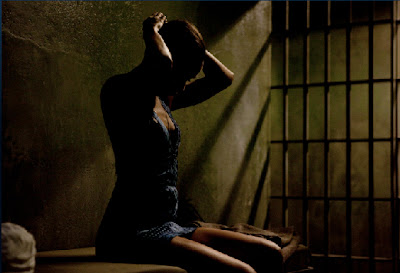 Zoe Saldana is like a beautiful painting in that it’s worth the hefty price of admission to simply sit and stare at her for two hours, so Colombiana definitely has that going for it.  It’s also nice to see a sister get a shot at being deadly and desirable for a change.  However, such novelties serve as little consolation for bad filmmaking.  The outlandish stunt work and set pieces of the Transporter films will play as incredibly silly in this context, so let’s hope that Besson and company are going for something a bit more grounded.  Films like Colombiana need not be completely original, but they should still be executed with precision.
Posted by Unknown at 7:57 PM