Movie Trailer: Never Back Down 2: The Beatdown 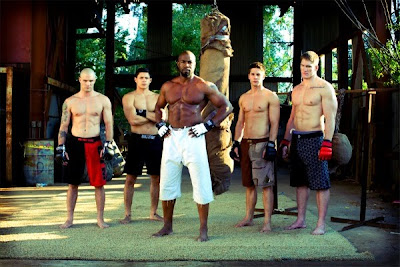 The original Never Back Down was essentially a mean spirited remake of the original Karate Kid.  It had very little going for it other than a competently staged final bout (for which it won an MTV Movie Award).  An inevitable but totally unnecessary sequel was all but assured.  The prospect of a follow up to a marginal MMA film held no interest for me whatsoever. Then I learned that it would be Michael Jai White’s directorial debut (read my excellent interview with him by clicking here).  Since Michael strikes me as the type that is successful at just about whatever he tries, I was eager to see a glimpse of this film.  Today I got my wish courtesy of the good people at Twitch.
Fighters from different martial disciplines and backgrounds form a surrogate family as they train for an upcoming MMA tournament known as “The Beatdown.”  They do so under the guidance of a disgraced former champion named Case (Michael Jai White) who hopes to mold them into competent MMA fighters.  Fight enthusiast Max (Evan Peters), who runs the competition, hopes to topple Case with the help of one of his own students.  The rest of Case’s pupils band together to protect their master and root out the turncoat.
Visually, there doesn’t seem to be anything that really distinguishes Never Back Down 2 from its predecessor.  It feels sort of standard, although there appears to be some rougher edges in terms of the cinematography and color palette.  Michael looks older and more grizzled than we’ve seen him before, sporting the raggedy beginnings of a Rick Ross beard.  We get a few scenes of him exhibiting his trademark martial prowess.  No matter how many times I see it, I am still quite amazed at how fast and agile Michael is for his size.
The rest of the cast is filled out by various athletes.  There is UFC fighter Todd Duffee, MMA fighter Scott Epstein and UFC Champion Lyoto Machida.  It is clear that the principle players are more than capable of delivering on the action front.  The real test will be the acting.  None of these guys are true thespians, but hopefully they can manage to not totally embarrass themselves whenever they aren’t administering punches and kicks.  There’s not enough in this teaser to truly see what their level of acting ability is.
I found the teaser for Never Back Down 2:The Beatdown to be a bit underwhelming, but through no real fault of its own.  I let Michael Jai White’s presence both in front of and behind the camera elevate my expectations for a sequel to a film that I didn’t really care for in the first place.  That’s on me.  The trailer for Blood and Bone wasn’t exactly that enticing to me either, but I ended up being floored by the film nonetheless.  There is nothing in the trailer for Never Back Down 2: The Beatdown that will deter me from seeking it out upon release.  Knowing Mike, he probably decided not to tip his hand too far before he delivers the trump card and takes the pot.
Posted by Unknown at 5:49 PM