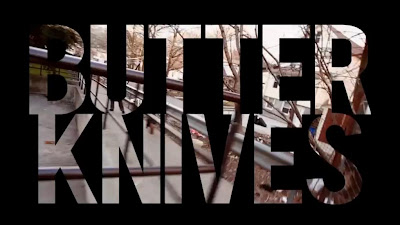 When one chooses to live a life of hustling, there are certain inherent risks that come with the territory.  Chief among those is being captured by the police.  As Robert De Niro’s character Neil McCauley said in the film Heat, "Don't let yourself get attached to anything you are not willing to walk out on in 30 seconds flat if you feel the heat around the corner."  Had Raekwon written the screenplay for that cops and robbers classic, the line might have read “Be ready to break out if you standing in front of your building and Po-Po jumps out on you.”
Dropping everything and running is the driving force behind the new video for Raekwon’s “Butter Knives.”  Remember the hilarious moment from the video for The Roots' “What They Do” that parodies the then common cliché of guys inexplicably running through the projects?  Well, in the behind the scenes clip for the “Butter Knives,” Raekwon finally gives an explanation for that otherwise abstract visual.  It’s still a handy piece of info even though it comes 14 years too late.

The video is essentially one long chase in which a suspect dressed in a hoodie and beige Timbs frantically runs from the police.  The whole thing is shown in a POV shot from the cops perspective.  From the moment he jumps out the van the chase is on.  The suspect starts out at the front of the building, cuts behind a few dumpsters in a parking lot and runs inside the lobby.  Unable to hide in a friend’s apartment, he dashes up to the roof.  He then climbs down the fire escape and back into the building.  He leads his pursuer back down to the lobby, where a nasty surprise awaits him.  All of this is intercut with Raekwon performing his rhymes in a project stairwell, complete with the requisite body language and hand movements.
The song itself is one of the very best cuts from Shaolin vs. Wu-Tang, with its cloudy, dramatic horns and militaristic drum rolls.  It also contains my favorite line on the entire album: “Who give a fuck if he's a swordsman, I'm a gunman, I run from nothing.”  Those are the kinds of declarations that no Wu-Tang album would be complete without.
The entire video was filmed on location at 185 Parkhill projects in Staten Island.  It was directed by Derek Pike and Woodworks in a fashion that hearkens back to the guerrilla sensibilities of videos like Raekwon’s own “Incarcerated Scarfaces.”  It’s a no frills affair that centers on the hood with minute details that only insiders would recognize.  Anyone who was ever into sagging their jeans remembers the necessity of having to constantly hold/pull them up when breaking out into a full on run.
No matter who's chasing you, all you have to do is get home.  In some cases, the neighborhood itself can serve as a labyrinth through which outsiders will have a hard time tracking you down.  If that doesn’t work, your countrymen can aid in slowing them down or stopping them in their tracks.  That’s a wonderful sentiment regardless of the context.  Some may fight with “Butter Knives,” but Raekwon’s musical and metaphorical swords remain razor sharp.
Posted by Unknown at 12:32 PM