No Defense Against Common Sense 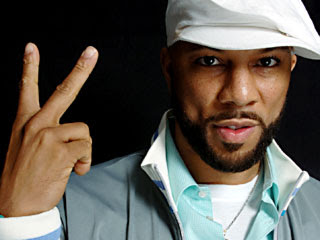 Whenever you can’t defeat your enemy legitimately, never underestimate the power of good old fashioned dishonesty.  The Obama administration has become bullet proof in the court of the public opinion in the wake of Osama Bin Laden’s death.  Scrambling in great haste to find anything they can use to vindicate the ruins of their party before the onset of the 2012 elections, they have resorted to character assassination.  Unfortunately, this time they have a targeted someone wholly underserving of their manufactured vitriol.
On May 11th, Michelle Obama invited Ronnie Rashid Lynn Jr., better known the masses as Common, to the White House for a poetry event.  Right Wing media outlets have been livid in their protests, which reveal either a profound ignorance of rap music or a malicious hostility towards it.  Fox News referred to Common as “vile.”  Matt Drudge accused him of advocating criminality and anarchy.  Sarah Palin came out in support of a Daily Caller article criticizing Michelle Obama’s decision with a sarcastic tweet.
In support of their bogus and ill-conceived argument, these people have cited lyrics from a poem read by Common on an episode of Def Poetry Jam.  The poem, entitled “A Letter to the Law,” has been fraudulently characterized as a call to arms against policemen and a death threat against then president George W. Bush.  As expected, certain lines have become the focus.  This is to the detriment of the poem itself, the mood and context of which are not threatening in the least.  Right wing pundits have effectively reduced it to a series of sound bites that will likely be read as inflammatory by the uninformed.
The poem calls attention to police brutality, as well as the way black icons are vilified by the news media.  It paints then President Bush as a war monger who should be burned in effigy (a symbolic burning, not a literal one):
With that happening, why they messing with Sadam?
Burn a Bush, cause for peace he no push no button
Killing over oil and grease, no weapons of destruction
How can we follow leader when this a corrupt one?
It also considers the war a subterfuge meant to distract the populace from more immediate and substantial concerns.  In a nut shell, those are the thoughts that render Common vile in the eyes of his detractors. The thoughts expressed in the poem are hardly those of a mouth frothing anarchist.  In fact they are quite “common” in many circles, namely ones populated with intelligent Americans of all races.
The poem also characterizes young black males as ready and willing to take it to the boys in blue, but promptly warns them away from such foolishness in favor of more constructive pursuits:
Black gem in the rough, you rugged enough
Use your mind and non power, get the government touch
Them boy chat chat on how him pop gun
I got the black strap to make the cops run
They watching me, I’m watching them
Them dick boys got a lotta cock in them
My people on the block got a lotta Pac in them
And when we roll together, we be rocking them
To sleep
No time for that, cause there’s things to be done
Stay true to what I do so the youth dream come
That line was conveniently ignored by right wing outlets as it greatly contradicted their reading of the poem.  At the end of the day, “A Letter to the Law” is not a call to anarchy.  It’s an appeal to a mentally and economically impoverished populace to arm itself with love and consciousness.
Right wingers have now expanded their definition of “vile” entertainers to include lyrically agile bohemians who recite afrocentric poetry.  In the real world, Common is the poster child of the backpacker movement.  He is categorized as a “hippie” by those who have disdain for that particular contingent.  His fans (of which I am one) consider him a gifted artist with a sometimes uneven body of work.
His first album, Can I Borrow a Dollar, was awash in hedonism.  His second album, Resurrection, began a personal and artistic evolution that brought Common to the very fringes of artistic expression.  His work is equal parts sexual, warm, thoughtful, introspective, self-critical and juvenile.  At times it has had black militant overtones, but it has never been anti-white or “gangsta.”  If anything, Common has always presented himself as the antithesis of all that Rap’s critics despise.
Yet, those demons would characterize him as vile.  A man whose work advocates black love and non-violence has been branded a traitor by political scum.  A man who once denounced his own homophobia in a song that chronicled his discovery of a friend’s sexual orientation is somehow a threat to all that is decent.  That President Obama can inspire his enemies to such lengths is both hilarious and enraging.  To hell with the lot of those devils.
Posted by Unknown at 3:56 PM