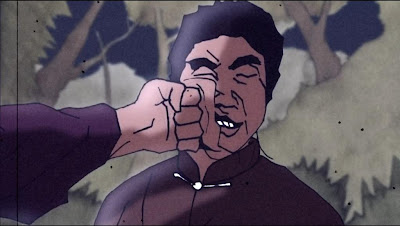 Cartoons and chop-sockies are like chocolate and peanut butter.  Back in the early to mid-1980’s, both were staples of Saturday programming.  Why no one ever thought to merge them together is one of the great mysteries of our time.  Well, it seems that someone has at long last decided to do the obvious. Artist/animator Aric Mannion and martial artist/stuntman Mike Wong have finally combined two great tastes that taste great together.  Well, not quite yet, but they have prepared a “proof of concept” trailer that offers but a glimpse of their curiously titled Funk-Gu.

The following synopsis is provided on the Vimeo page for the trailer:
"Funk-gu" breathes new life into the action-animation genre; blending fast-paced action, a captivating tale and funk music into a singular stick of Kung-Fu dynamite.
In a small, forgotten village at the base of a mountaintop shrouded in myth, a young gambler's path brings him to a stream filled with a cache of golden treasure. After befriending an old pirate with claims to the gold of his own, the two strangers follow the trail of treasure to a local kingpin. These unlikely heroes may be the village's only hope for salvation under this powerful villain's tyrannical rule.

Casual viewers will likely note the crudeness of the animation and be immediately turned off.  More perceptive viewers will quickly realize that such an aesthetic is absolutely necessary for a chop-socky cartoon.  Classic martial arts films of the 1970’s exuded a grubby charm that would be completely lost with state-of-the-art production values.  For example, The fight that takes place in the second half of this trailer looks rotoscoped.  It could almost be used a bumper for a Black Belt Theater style block programming on a cable network.  That's exactly how something like this should play.

I really hope Mannion and Wong get the necessary funding for this project.  I’d love to see a completed episode.   Funk-Gu could play like a long lost pop culture gem from the 70's or 80' that is just now getting a release on DVD.  That's how it was in the days before DVD and the internet, when the phrase "out of print" meant just that.  These days, such hidden treasures are getting harder and harder to come by, thus creating the necessity for throwbacks like Funk-Gu.
Funk-Gu: the animated trailer from Aric Mannion on Vimeo.
Posted by Unknown at 1:42 PM