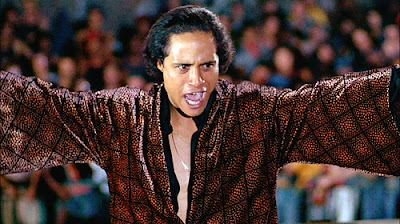 My name is Scott “Tre” Wilson, and I am a self professed Black geek.  I’ve been reading comics since kindergarten.  I am an unapologetic Star Wars fan, even in the aftermath of the abominations known as the prequels.  At one point in my life I watched more anime than regular movies or television shows.  I fit the profile of a “geek” to a “t”.  I was also raised on Hip-Hop music, and consider Malcolm X to be a personal hero.  His autobiography holds a special place in my heart.  I’ve even been known to enjoy the occasional ‘hood flick or ghetto comedy from time to time.
That witty little preamble is my way of addressing the paradox that Black geeks exist in.  The Hollywood machine, and even Black folks themselves, often buy into old and outdated paradigms regarding the tastes of African Americans.  In their minds, there are certain things that Black folks should stay far away from.  Black geeks appear to live in direct defiance and disregard of those social norms.  The truth is actually a lot more complicated than that.  The Black geek exists with their feet firmly planted in two different cultures, often times never being fully accepted by either.
At best, Black geeks are regarded as some mythic creature or endangered species; something that is spoken about more than seen, like the mythic Sasquatch.  Mostly though, self professed Black geeks aren’t acknowledged at all, since we engage in things are considered off limits to African American culture: science fiction, horror, animation, etc.  We also have the rather nerdish penchant of intellectualizing and analyzing things, sometimes overly so.  Being obsessive compulsive about something that you shouldn’t be into in the first place is a rather untenable position.
The more creative and enterprising among us try valiantly to merge our interests, thus creating a place where all of them can coexist in relative harmony.  We dream of quality genre properties centered on Black characters.  We’d love to see major Hollywood films scored by the likes of The RZA, Kanye West, DJ Quik, or DJ Paul and Juicy J.  We see a world where T’Challa is as much of a household name as Kal-El or Bruce Wayne.  The Hughes brothers regularly direct films with nine figure production budgets in our little utopia.
Our efforts are often met with the sad and angering realization that such a Utopia was never meant to be.  The entertainment complex is staunchly dedicated to the idea that Blacks only like certain things.  What’s worse, they think that we only have the capacity to appreciate one thing at a time.  In the early 1990’s it was “urban dramas” and ‘hood flicks.  By the mid 1990’s, tastes had shifted to profane, raunchy comedies in a ‘hood flick setting.  Dance films like Stomp The Yard were in vogue for a minute.  Now we are being inundated with an endless parade of chitlin’ dramas.  The black viewer with varied tastes isn’t even factored into the equation.
Then you have those of us who sadly, and quite ignorantly, follow the status quo. They don’t see the need for better films and television programs.  It’s just entertainment anyway, so who cares?  We got “real” things to worry about.  That kind of apathy is used to fuel Hollywood’s willful ignorance to our plight.  After all, numbers don’t lie, do they?  Tyler Perry movies do great business, so that must be all “they” want to see, right?
What is one to do when faced with such a sad state of affairs?  Fight the good fight, that’s what.  Since starting Scott’s Introspection Section, I have come across a variety of brothers who are in the trenches everyday, representing our interests.  Brothers like Michael Jai White, Ben Ramsey, Larnell Stovall, Chyna McCoy, Kantz, R.L. Scott, Allen Scott Gordon, David Walker, and Hannibal Tabu.  They go hard, creating exactly the kind of entertainment they want to see.  They have shown me that I am not alone in this fight, and I intend support them as best I can.  Roger Ebert once said that the best way to criticize a film is to make another one.  I think that logic can be applied to just about any medium.  Under representation has always been the dilemma of not only Black geeks, but Blacks as a whole.  Maybe it’s time we start making such a ruckus that they have to pay attention to us.