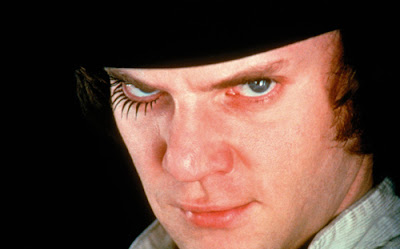 The argument of nature versus nurture will perhaps never be resolved.  Some believe that criminals are born, while others believe they are created.  That sort of polarized, extremist thinking prevents us from finding a resolution.  Despite our many technological and scientific advances, we remain ill equipped to deal with our own criminal element.  This is especially true in regards to the emotionally and mentally disturbed.  Some humans are defective.  If they don’t deserve to put down like rabid dogs, how do we deal with them?  Stanley Kubrick’s adaptation of Anthony Burgess’ frightening dystopian novella proposes an answer, albeit a horrifying one.
A Clockwork Orange tells the story of Alex DeLarge, a bright but deeply sociopathic young man.  He leads a pack of his peers on nightly rampages of sex and violence.  They indulge in gang rapes and gang rumbles fueled by milk laced with conscious numbing drugs.  After Alex brutally disciplines his “droogs” for questioning his judgment, they turn against him leaving him to the mercy of the local authorities.
Imprisoned for murder, Alex volunteers himself for new form of torturous aversion therapy called the “Ludvico Technique.”  He does so in pursuit of an early release, but the risk proves far greater than the reward.  The therapy leaves him crippled by sickness in moments of sexual arousal or violent confrontation, thus rendering his base instincts impotent. He can no longer rape or kill.  Thus, he is “reformed.”  Released on his own recognizance, he finds it nearly impossible to function normally.

As explained in the supplemental materials for the 40th Anniversary Edition Blu-ray of A Clockwork Orange, the most disarming thing about Alex is his zest for life.  Though he expresses disdain for certain things, he is neither hateful nor unpleasant.  He truly loves what he does.  Though an unrepentant criminal, he is able to see the beauty in the compositions of Ludwig Von Beethoven.  Kubrick allows him to be a truly complex character and not simply a cackling villain.  That is what ultimately makes Alex both frightening and sympathetic all at once.
Enough cannot be said about Malcolm McDowell’s performance.  He plays Alex as the embodiment of youthful mischief.  Though that last word implies that Alex’s antics aren’t all that harmful, it is essential to understanding his psychosis.  Children never fully grasp the consequences of harmful actions.  They have neither the intelligence nor the emotional maturity.  Alex may understand the impact of his behavior on an intellectual level, but emotionally he is incapable of empathy.   The world is his playground.  Everything and everyone is there for his amusement.  He clearly enjoys the ride, even when his victims cower and recoil in horror at his insanity.
The lineage of the character should be readily apparent to anyone who has been paying attention for the past 40 years.  Traces of his spirit can be seen in Menace II Society’s O-Dogg, or Robocop’s Clarence Bodikker.  Perhaps the most obvious beneficiary of Mr. DeLarge’s influence is Heath Ledger’s portrayal of The Joker in The Dark Knight.  Christopher Nolan’s crime film envisioned the Joker as a force of nature not bound by any delusions of morality.  He too, enjoyed what he did, though he was nowhere near as human as Alex.  The Joker was a mythical bogeyman.  Alex, on the other hand, was more relatable.  He had no ambitions toward bringing a city to its knees, or making some grandiose point.  He simply did what he did, and did it with gusto.
Alex DeLarge turned cinematic villainy into something more primal and organic.  Stanley Kubrick was never afraid of exploring the more extreme corners of human behavior.  In fact, he relished it.  In that sense, Kubrick and Alex were kindred spirits channeling their psychic energy through Malcolm McDowell.  The scariest kind of evil is that which has no clear or obvious motivation, like money or power.  Alex would likely still do what he does even if there was no way to profit from it.  That’s simply who he is, God help us all.
Posted by Unknown at 7:45 PM