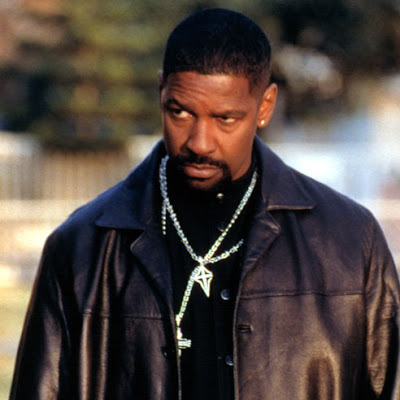 It has been said that an action film is only as good as its villain.  While that might be overstating things a bit, it has to be acknowledged that a great villain is a crucial piece of the action movie puzzle.  A memorable bad guy can literally carry an otherwise mediocre film.  They can also transcend said film and become a part of cinematic history.  In 2001, almost a month after the September 11th terrorist attacks, one of America’s most respected actors took his first trip to the dark side and emerged as one of the most memorable rogues to ever grace the silver screen.
Up until his role as Alonzo Harris in Training Day, Denzel Washington had been Hollywood’s preeminent “Race Man.”  He had always been dedicated to providing the best possible examples of black manhood.  For a long time he refused to film sex scenes out of fear that his children would see them. He also famously took filmmaker Quinton Tarantino to task his liberal use of the N-Word on the set of Crimson Tide.  Such reservations did not prevent him from investing his characters with humanity, charisma and complexity.  His role in Malcolm X placed him undoubtedly at the very top of his craft.  Yet he still lacked one crucial thing that such thespians required: a great villain.  Antoine Fuqua’s police drama Training Day would change that. 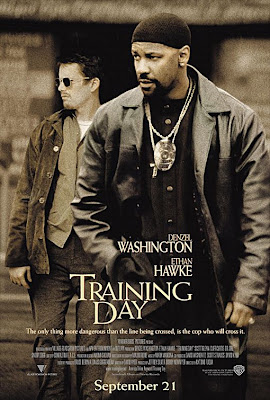 Training Day told the story of Jake Hoyt (Ethan Hawke), a Los Angeles police officer who is auditioning for a spot on an exclusive narcotics unit headed up by Detective Alonzo Harris.  Harris’s training methods are unorthodox to say the least.  He operates with little actual supervision, and is not above cutting corners to get convictions.  The forthright and naive Hoyt plays along, going against his better judgment.  Before days end, he finds himself embroiled in an elaborate plot to prevent Harris from being assassinated by the Russian Mob.  He can either go along with the scheme or become a patsy.  Through it all, Harris emerges as a rogue cop of Machiavellian proportions.
To truly understand the character of Alonzo Harris, one must consider the setting and time period of the film.  The city of Los Angeles had undergone a massive transformation in the public consciousness throughout the 1990’s.  West Coast gangsta rap put LA gang culture on blast, familiarizing listeners with the Bloods and the Crips.  It also portrayed police officers as an occupying force capable of unspeakable racism and brutality.  That characterization seemed to be confirmed by The Rodney King beating and the Ramparts scandal.
This was the world of Training Day.  Alonzo Harris was charged with protecting the people of LA from purveyors of narcotics, but he chose instead to serve as a ringmaster of sorts.  His dress code was that of a player.  His wardrobe was subtle yet pimpish.  His neck was adorned with tiny platinum jewelry.  He rolled in a tricked out whip.  Such affectations helped him to maneuver through the labyrinth of gangbangers and drug peddlers that he dealt with every day.
As with many rogue cops, Alonzo’s greatest strength was also his biggest weakness.  Like the criminals he pursued, he was confident in his ability to manipulate his way out of any situation.  He ignored “small fish” while taking out key players in the dope game.  He stepped in after the dust had settled to collect his bounty.  While his attitude and actions were every bit as predatory as the “animals” he condescended to, he never manages to make that connection.  Such hubris and hypocrisy is par for the course when dealing with someone like Alonzo.
Training Day resulted in Denzel getting his first ever best actor Oscar.  That award is still contested in certain circles.  Skeptics lament the fact that a respected black actor had to soil his image to finally receive top honors from the motion picture Academy.  The institutional racism of the Academy notwithstanding, cops like Alonzo Harris do exist in the real world.  Instead of eradicating those elements that destroy the ghetto, they allow the blight to continue in a “controlled manner.”  They are perhaps the worst villains of all, as they profit from crime under the guise of upholding the law.  Alonzo is snake in every sense of the word, and Denzel Washington brought him vividly to life.
Posted by Unknown at 7:57 PM