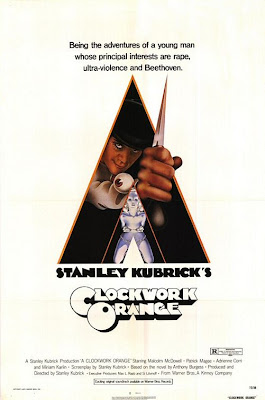 Society is fearful and envious of youth, especially in the wake of social upheaval.  Young people represent a threat to the status quo as they often do not value the traditions of their elders.  They also don’t fear or comprehend consequences.  40 years ago, visionary director Stanley Kubrick was able to harness that fear and channel it into a single film.  That film was both a celebration of the most depraved juvenile delinquency, and a meditation on crime, punishment, and reform.
Writer Anthony Burgess, inspired by both the rape of his first wife and the news that he was suffering from an inoperable brain tumor, wrote a little novella called A Clockwork Orange in 1962.  The book told the story of Alex, a bright young lad with an affinity for Ludwig Von Beethoven.  He’s also a cheerful sociopath.  Fueled by milk laced with narcotics, he leads his band of “Droogs” on nightly excursions of violent mayhem that include murder and rape.  His reign of terror is ended when the law catches up with him.
The powers that be discover that he is the perfect candidate for an experimental form of aversion therapy called the “Ludvico Technique,” which supposedly cures violent and sexually deviant behavior.  Alex submits himself to the program, and in so doing earns his freedom. Once released, the “Ludvico Technique” proves not so much a cure as an ongoing form of psychological torture.
Director Stanley Kubrick, ever the intellectual and provocateur, was introduced to the novel by a colleague.  After development on a project about Napoleon stalled indefinitely, Kubrick turned his attention to the exploits of Alex.  Working on a budget of 2 million dollars, he set about bringing Burgess’ vision to the big screen.  Malcolm McDowell, a British thespian then known for his role in If, was cast as Alex.
The film remained true to the story of the novel, with one glaring omission.  The American printing did not include a final chapter that had been included in the British printing as an addendum.  In it, Alex was compelled to leave behind his violent ways of his own volition.  He had reformed naturally, without the aid of brainwashing.  Kubrick did not include this chapter in his filmed version, which would lead to a rift between him and Burgess.
Kubrick visualized the novel in a most curious fashion.  His background as a still photographer was evident in every frame.  The “futuristic” décor of the first act emphasized basic shapes such as spheres and rectangles.  It also felt oddly antiseptic.  Bizarre and sometimes sacrilegious imagery were inserted in a strobe like fashion during key moments.  It had the effect of subliminal suggestion even though it was completely noticeably overtly.
Nudity and violence were portrayed casually and even comically.  Bare breasts bounced and victims were beaten to bloody pulps.  By the time of the films release, the MPAA ratings system had only been in place for a few years and the rules weren’t clearly defined.  Movies like Bonnie and Clyde, The Wild Bunch, and Straw Dogs pushed the limits of mainstream movie violence.  Clockwork was a more potent concoction than all of them, since it had no pretense towards realism.
The MPAA reacted accordingly, slapping the film with an X rating which was later changed to an R after Kurbrick made some post release cuts.  The impact of the film on the populace was nothing short of earth shattering.  British censors were incensed by it, considering it a threat to the very fabric of civilization.  The furor over the film reached deafening levels.  Kubrick pulled it out of circulation following death threats.  He did so after it had already played for 15 months in London’s West End.  It remained a rare but sought after artifact in the UK until after his death in 1999.
40 Years later, A Clockwork Orange stands as a daring morality tale.  It snatches away all pretenses and posturing from a society that would sloppily apply band-aids to its moral dilemmas rather than find effective solutions.  People will tolerate almost any violation of their civil rights in order to feel safe and protected.  Kubrick showed us this as only he could.  Though his vision was misunderstood (and to a large extent still is) he still felt compelled to share it with the world.  Once you see the world through Alex’s eyes, it’s hard to go back to way things were.  Bravo, Mr. Kubrick.
Posted by Unknown at 2:42 PM