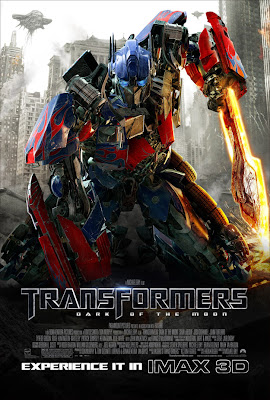 Decades before the Cybertronian wars reach earth, a ship from the robot planet crash lands on earth’s moon.  That event prompts President Kennedy to kick America’s space program into high gear.  During the first lunar landing, the astronauts carry out a top secret mission to investigate the strange craft.  42 years later, The Autobots and Decepticons have brought their destructive civil war to earth.  A defeated Megatron (Hugo Weaving) plans to obtain the precious cargo of the downed craft and use it in a scheme that will return him to power and revive his beloved Cybertron.  Optimus Prime (Peter Cullen) and Sam Witwicky (Shia Lebeouf) must engage the Decepticons in a final battle that holds the survival of humanity itself in the balance.
Transformers: Dark of the Moon concludes director Michael Bay’s critically lambasted adaptation of the Hasbro toy line.  Over the course of three films, he has refined his techniques to their absolute visual zenith.  He has also indulged his excesses to an ungodly degree.  This entry in the series is as uneven a mass entertainment as has ever graced the silver screen.  Which side of the divide the viewer falls on will depend on his or her tolerance for all that is unapologetically Michael Bay.
Bay has managed to clear up the visual clutter of the first two films considerably.  He employs slow motion a bit more sensibly, allowing it to render the aerial acrobatics and grappling matches of the title characters at least somewhat coherent.  The final act of the film is an extended alien invasion set piece that takes place in Chicago.  It contains some of the most violent and outlandish sequences in the franchise to date.  Some of them are truly inspired, as Bay doesn’t just pile on the pyrotechnics incessantly, but finds new variations on old cliff hangers and sight gags.  Unfortunately, the fireworks are allowed to go on for far too long.  The whole thing becomes tiresome as opposed to exciting.
As a visual FX showcase, Transformers: Dark of the Moon is virtually peerless.  I can’t imagine the concept of giant transforming robots being visualized any better than it is here.  The Transformers convincingly blend and interact with their environments.  Their lumbering movements are sometimes a bit too lithe and spry, but they always feel massive and hefty.  In an era where even the best CGI often looks like expensive animation, Industrial Light & Magic seem to have an understanding of how to apply and incorporate it into live action settings without disrupting the suspension of disbelief.
The plot borrows elements from a three part story arc from the first season of the generation one animated series entitled “The Ultimate Doom.”  That 27 year old syndicated cartoon handles said elements in a much more coherent manner than Transformers: Dark of the Moon ever manages to.  Screenwriter Ehren Kruger presents the mythology of the Transformers in an amazingly disorganized manner.  As the first two acts progress, the plot becomes even more muddled with every new element or character that’s introduced.  Nothing ever gels into a cohesive and workable story.
The human characters are barely worth mentioning.  Shia Lebeouf, in his third turn as Sam Witwicky, has paired the character down to collection of exaggerated reactions and mannerisms.  He seems to exist in an odd limbo where everyone responds to each other in terms of broad gestures.  John Malkovich appears in a role that could have been played by just about anyone and probably should have been reduced to a brief cameo.  Tyrese Gibson also reprises his role as cinemas preeminent trash talker who loses his balls when the shit gets too thick.  Leonard Nimoy, who lent his vocal talents to the animated feature film back in 1986, appears here as the voice of Sentinel Prime.
Transformers: Dark of the Moon is both exactly what it should be and not nearly as much as it should have been.  The film will undoubtedly appeal to its core audience.  As far as the main conceit/gimmick of the property is concerned (giant transforming robots who bash each other into oblivion) it delivers marvelously.  It falls short in almost every other way, treating the basic fundamentals of storytelling like a mere annoyance.  Michael Bay had it in him to deliver something more substantial, but made a conscious decision not to.  That the film has any redeeming qualities at all considering all of its flaws is one of the great wonders of our time.