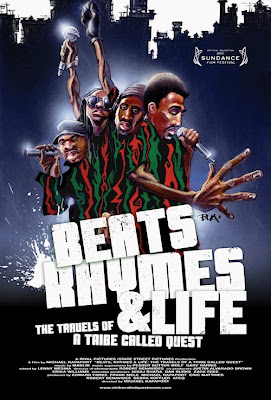 If your musical tastes run along the same lines as mine, The Low End Theory was one of the defining albums of your youth.  The joys of that album are likely lost on those who have never and still do not consider rap to be “real” music (yes, those people still exist, and in greater numbers than you think).  Well, there’s nothing like a documentary to bring the uninitiated up to speed.  Documentaries immortalize the legacies of artists in way that the works themselves cannot.  Actor Michael Rapaport has captured the trials and tribulations of A Tribe Called Quest for posterity with his directorial debut Beats, Rhymes & Life: The Travels of a Tribe Called Quest.
What stands out the most about the trailer is how the documentary seems to have captured the visual aesthetic and motif of the group’s album covers, all of which feature a collage of Afrocentric colors and abstract imagery.  The lettering shown in the clip is reminiscent of that on the album track listings.  There also seems to be ample concert footage showing Tribe in their element, the most eye catching of which shows Tip hopping up and down onstage in front of a giant digital screen.  The editing and transitions look smooth.  This is clearly not the usual straight to DVD affair with non existent production values. 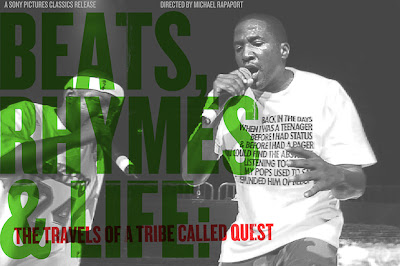 This documentary arrives amidst controversy.  Tip has publicly withdrawn his support from the project.  According to Rapaport, Tip is having a case of the jitters.  The film supposedly offers an insiders view of the incessant bickering between him and Phife.  Though I haven’t yet seen the film, I am thinking that Tip’s anxieties may be unfounded.  There likely isn’t anything in this documentary that will sully the group’s image beyond repair.

A Tribe Called Quest is as revered as the Stones and The Beatles in some circles.  That may seem like a gross overstatement to non-believers, but it’s an accurate assessment.  Within hip-hop, there influence crosses more boundaries than even many of their fans realize (The production on The Low End Theory was a primary inspiration behind Dr. Dre’s The Chronic).  Outside of hip-hop, they were considered a pleasant alternative to the excesses and cliches of mainstream rap music.   A legacy like that deserves to be studied.  Hopefully Micheal Rapaport was able to translate his reverence into something that will translate to a mass audience.