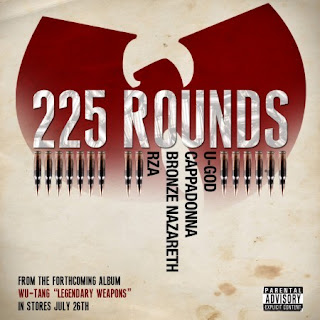 Tastes and trends change, but the Clan marches on.  Though they stopped being relevant to mainstream listeners and black audiences years ago, The Wu continues to release new music to the few but faithful.  I count myself in that exclusive fraternity, and will always give new offerings from the Shaolin crew a chance.  Though their heyday can never be repeated, they are still capable of delivering heat.  “225 Rounds,” from the upcoming compilation Legendary Weapons (Named after the classic Shaw Brothers flick) is a brand new banger that teams a rather odd collective of members and affiliates for a round of head cutting.
The track opens with what sounds like a snippet of dialogue spoken by Yaphet Kotto, possibly from Homicide: Life on the Street.  It then goes into a plodding boom bap drum march.  Synthesized horns precede juke joint piano keys over tambourines and blues guitar stings.  The bassline cuts deep grooves into the track.  Producers Noah Rubin, Fizzy Womack (M.O.P.), and Andrew Kelley provide a bluesy, Blaxploitation ambience.  You can picture gangster characters in an old school flick chopping it up over a round of drinks in a Harlem bar. 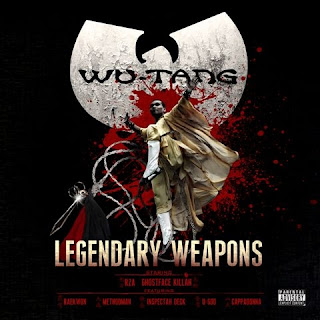 U-God is first up to bat, offering a verse that is a bit more coherent than those from his early days but still impenetrably abstract.  Cappadonna, by contrast, offers none of the indecipherable slang and wordplay that he is known for.  However, he is as lively as ever.  Bronze Nazereth delivers his verse in a smothered mumble.  RZA, batting clean up, brings his trademark offbeat flow and random musings.  He has never been the most coherent Clan member, but he remains one of the most interesting.  His presence seems to intensify the energy of the song.
All in all “225 Rounds” does not rework the Shaolin blueprint, but it is a vigorous shadowboxing session that will please fans.  It’s good to know that RZA and company can still get down to business when they get ready.  One day, they may hit us off with one final, classic group effort that reaffirms our faith.  Until then, songs like this (coupled with unbelievably consistent catalogue of Ghostface) serve as an adequate appetizer.  You can never go home again, but you can always carry on tradition.  Suuuu!
Posted by Unknown at 4:18 PM