Twilight of the Illusionists: Why I Will Always Prefer Practical Effects to CGI 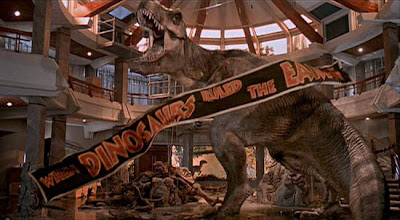 People have been taught to automatically associate the concept of “newer” with that of “better.”  Often times newer merely means easier or more convenient.  When computer generated imagery was introduced into the tool chest of Hollywood special effects technicians, it gradually overtook other time honored and proven techniques.  Now there is hardly any kind of visual or optical effect that isn’t rendered with the help of a computer.  As a tool, it is amazingly versatile, but it’s not without its limitations.  CGI often gets in the way of special effects are meant to do: create a convincing illusion.
Often, modern films tend to miss the point of what special effects are supposed to do.  Ideally, an effect isn’t supposed to be noticed by the audience.  Sure, they know it’s not real, but they should still be convinced of what they are watching.  CG produces landscapes and creatures that look good from a technical standpoint.  They are obviously labored over and highly detailed.  Yet they still have the weightlessness of animation.  They never feel substantial or real.
The viewer has a subconscious awareness that they are not looking at something that is actually there.  That’s the advantage that animatronics, makeup, models, stop motion and matte paintings will always have over CGI.  The aforementioned techniques involve something that was actually set up and filmed by a camera, something that has mass and takes up space.  CGI, by comparison, is simply a sophisticated way to draw something on an animation cell and incorporate it into a “real” environment or vice versa.
I tend to watch lots of older films on DVD and Blu-ray.  Most of them tend to be favorites from my youth.  It’s partially out of nostalgia, but also out of appreciation for the craftsmanship behind those films.  A few months back I treated myself to multiple viewings of the special edition DVD of An American Werewolf London.  Rick Bakers makeup effects still hold up remarkably well.  I was intrigued by the time and effort that went into getting them right.  Baker and his crew had to design a werewolf transformation that would take place on camera and in full light.
Just last week I sat down and watched of 2001: A Space Odyssey completely from beginning to end.  Douglas Trumbull used innovative (for the time) techniques that are considered basic by today’s standards.  Looking at them now, I was struck by how crisp the FX where.  There aren’t as “sophisticated” as what modern audiences are used to, but they served their purpose beautifully.  As the massive spacecraft lumbered slowly through the endless void of space, I found myself totally engrossed in what transpired onscreen.  After a while I stopped looking for the flaws and just accepted the illusion.  Trumbull used models, front projection, and other basic illusionary techniques to create the reality of space travel.
In contrast to those older films, the newly released Green Lantern has the most modern FX technology at its disposal but manages to produce less satisfying results. The effects in the film aren’t bad by any means, but they also aren’t very convincing.  Not once did I actually believe that Ryan Reynolds and Mark Strong were on a distant alien world named Oa.  Never for one second did I believe that either of them occupied the same space with the alien creatures they conferred with.  The bizarre cityscapes are bright and colorful, a beauty to behold.  Alas, it never seemed like it was actually there.  It only existed as electrons on computer screen, tiny pixels that had been arranged into complex patterns.  It was impressive, but didn’t give off the same sense of tangibility as a scale model, or even a matte painting.
While it’s futile to wish that special effects technicians would revert to the old ways, I still hold out hope that one day CGI will be used properly.  I’m not convinced that it was ever meant to supplant practical effects the way it has.  It should have been used to enhance them, not overtake them.  Technicians now do less with what they perceive to be more, when they used to do much more with incredibly less.  The old techniques had their limits, but they went much further toward drawing the viewer in.  Now, people spend more time looking for the seams than simply enjoying the ride.
Posted by Unknown at 7:58 PM