The Wu-Tang Clan’s efficiency as a collective has diminished greatly in the last decade, as certain solo careers have fared far more than others.  Though it is well past their heyday, the clan has been more consistent in the last two years than during almost any time since their height.  In continuance of their current hot streak, the compilation album Legendary Weapons (named after the Shaw Brothers classic Legendary Weapons of China aka Legendary Weapons of Kung Fu) offers a helping of tracks that feature various group members spitting over stripped down beats by sonic architects such as Lil Fame, Noah Robin, and Andrew Kelley. 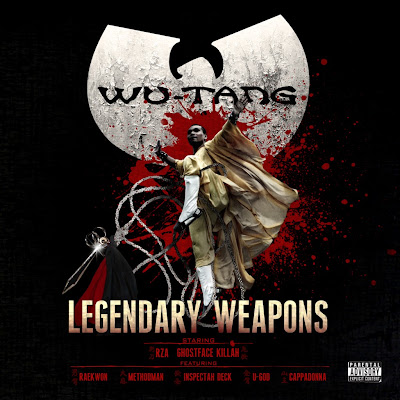 The Collection hits the ground running with the adrenalized opener “Start the Show” which pairs Raekwon with The RZA.  Producer Street Radio provides funky, prickling guitar bass and skeletal drums.  The barren soundscape is adorned with ambient noise that gives the air of a live performance.  Raekwon delivers an uncharacteristically “conscious” verse.  RZA follows suit, commenting on how western powers have conspired to unjustly eradicate Islam from the world. The tempo of the track, coupled with its compact length, allows both artists to sprint all the way the finish line.

“Laced Cheeba” teams Ghostface with Sean Price.  The low fidelity rumble of muffled 808’s erupts in droning fashion.  Ghost’s trademark animated flow blesses the sedate but gritty track with life.  As always, his infectious energy nearly renders the lyrical content nearly irrelevant.  Sean Price’s stoic Brooklyn chest thumping matches the plodding energy of the music.  Trife Da God provides exactly what a member of a Wu-Tang affiliate group is expected to, holding his own but being drowned out by his two more skilled colleagues.

“Diesel Fluid” has Method Man, Cappadonna and Trife Da God issuing Shaolin style boasts over hazy organ keys and synthesized wood instrument stabs.  The track is a head-nodder, but it feels a bit too hollow.  “The Black Diamonds” Lines up Ghost with Rock Marciano and Killa Sin.  Dread infused piano keys two step their way through the track, before building to an imposing crescendo and dissipating into a mournful flutter during the hookless pauses between verses.    The drums provide play out like a military march.

The album’s title track features Ghost attacking thick boom bap with wind instruments that sound to be awakening on a Sunday morning.  Their otherwise soothing melody is rendered frenetic by the drums.  AZ and M.O.P appear alongside Ghost to add some vintage mid 90’s NYC flavor.  The combo might seem contrived at first, but it makes for a nice and logical progression throughout the song.

Inspectah Deck and U-God team up for the “C.R.E.A.M” style dirge “Never Feel This Pain,” though the results are perhaps drearier than that early hit.  Over horns, strings, and high pitched piano keys that seem to emanate from way off in the distance, the two lament hood level struggle and the choices it prompts one to make.  The track has a bluesy, slightly reggae feel.  The simple vocabulary and basic delivery of the artists helps to convey the intended emotions.

“The Business” is a Wu-Tang style head chopping session featuring Killa Sin.  Sharp yet fluid string bass precisely cuts through the murky waters of the track, as drums similar to that of MC Lyte’s classic “Paper Thin” add to the requisite grit.  Sin does his thing no doubt, but he is clearly helped by the power of the music selection.  It feels like a trek through a treacherous swamp.

As a whole, Legendary Weapons feels more like an extended jam session or a mixtape featuring original production.  It takes the Clan back to their gritty early 90’s roots.  It’s a paired down set, shedding much of the bloat the plagued pretty much every group release after Wu-Tang Forever.  Unfortunately, too much mic time is allotted to various Wu-Tang affiliates when it would have been better suited to corel group members.

Legendary Weapons is faith affirming broadcast on a very exclusive frequency.  The Clan, along with producers Lil Fame, Noah Robin, and Andrew Kelley aren’t trying to win over any new converts.  They simply provide a sound that best suits the artists.  Luckily, that sound happens to be of an ilk that is highly undervalued in the current era.  Sometimes, when artists follow their guts instead of charts and retail, they turn in surprisingly strong work.