When media outlets initially revealed the reported budget of Terminator 2: Judgment Day, it came as an apocalyptic shock to rival anything depicted in the film itself.  The price tag was a then unthinkable 100 million dollars.  Any blockbuster of the time considered itself lucky to cross the century mark at domestic box office, so to actually spend that much money to make a film seemed insane.  Add to that the fact that Cameron was just coming off of the mixed reception to his expensive underwater sci-fi opus The Abyss, and the whole endeavor seemed a recipe for disaster.  Here was a sequel to an incredibly well received yet undeniably modest success that didn’t seem to have much mass appeal.  As came to be the norm for most of Cameron’s productions from that point on, he knew better than his detractors. 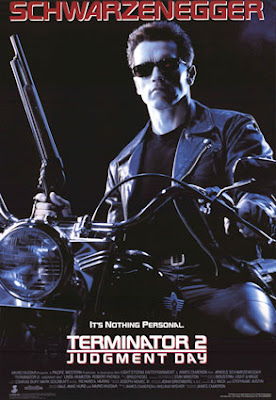 Terminator 2: Judgment Day picks up seven years after the conclusion of the first film.  The malevolent computer network known as Skynet launches a second assassination attempt on John Conner (Edward Furlong), this time as he enters adolescence.  A more advanced model Terminator, the T-1000 (Robert Patrick), is sent back in time to dispatch of the youngster.  In an interesting twist, the same T-800 model (Arnold Schwarzenegger) who tried to kill Sarah Conner (Linda Hamilton) in 1984 is sent back in time as well, but with a decidedly different mission than before.  It is to intercept John and protect him from the T-1000, ensuring that he will grow to adulthood and save the human race.

T2 is not so much a sequel as it is a full on remake of the first film.  It has a more complex plot and is infinitely larger in scope.  One gets the sense that this is the film that Cameron wanted to make in the first place.  It is best to think of it is an extended chase that occasionally slows down to deliver exposition and character development.  The set pieces alternate from large to small throughout the run time, revolving around the protagonists attempts to evade the ever persistent T-1000.

T2 represented a significant turning point in James Cameron’s career.  He eschewed the gritty “slasher film in sci-fi clothing” intensity of the original for something more populist and calculated.  While The Terminator was a nice little sci-fi/action flick that packed an exponentially bigger punch than anyone could have expected, the sequel was an unapologetic blockbuster.  It indulged in much humor at the expense of the T-800, who was undoubtedly a figure of fear in the original.  It also carried a rather heavy handed anti-war message that was very effective considering how insincere and obvious it felt.  Cameron was casting a much wider net this time, showing the world that his sensibilities could successfully be applied to a mass entertainment.

In his arsenal, Cameron had the talents of cutting edge FX companies like Dreamquest Images and Industrial Light & Magic.  The latter provided him with his greatest weapon yet: Morphing.  It proved to be the ultimate way to envision the T-1000.  The new model terminator was made of liquid metal.  This made it able to disguise itself, form bladed weaponry with its limbs, and repair damage almost as it occurred.  It was smaller, faster and stronger than the lumbering T-800.  It was also considerably scarier from a conceptual stand point.  Dennis Muren employed CGI (then in its infancy) to its absolute limits, conjuring images that would go an extremely long way in achieving the desired illusion.

In the end, the exorbitant budget proved to be a wise investment.  Terminator 2: Judgment Day became star Arnold Schwarzenegger’s biggest hit ever, grossing over 200 million dollars domestically and nearly 520 million worldwide.  Amazingly, Cameron would go on to write and direct blockbusters that would dwarf T2 in terms of cost and box office admissions.  Arnie would eventually become governor of the golden state, but none of his subsequent films was able to match the mammoth success of T2.  20 years later, it is as taught and relentless a blockbuster as has ever been made, and its influence can be seen in any number of cyberpunk films, most notably The Matrix trilogy.  Happy 20th Birthday Cyberdyne Systems Model 101.  You told us you’d be back the first time around, and brother, you weren’t lying.