Ridley Scott’s sci-fi/horror classic Alien was a tough act to follow.  It combined surreal visuals, murky atmospherics, and subconscious male sexual phobias into a suspenseful concoction.  In its own way, it was just as influential as the all-time top grosser Star Wars.  No one dared try to follow it up.  No one, that is, except for a young Canadian that just helmed a modest sci-fi/action hit starring an Austrian born bodybuilding champion.  Preproduction on a modern updating of Spartacus had fallen through when another project caught the attention of James Cameron: a sequel to Ridley Scott’s space faring nightmare.  Instead of trying to outdo the maestro at his own game, Cameron chose to offer something else entirely. 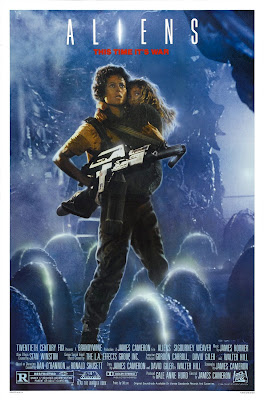 57 years after the horrifying events that took place on the space freighter Nostromo, Lt. Ellen Ripley (Sigourney Weaver)remains adrift in space and deep in a hyper sleep.  When her ship is recovered by a deep space salvage team, she finds herself at the mercy of the Weyland Yutani Corporation for destroying their ship.  Her story about the deadly creature that made such drastic action necessary falls on deaf ears.  She is further horrified to learn that the planet from which she and her crewmates recovered the creature has now been colonized.  When communications with the colonists suddenly cease, Ripley is commissioned to accompany a platoon of marines on a reconnaissance mission.  Once they land on LV-426 however, the marines find that their weapons and training are of little use against the malevolent hive of Xenomorphs that have overrun the complex.

Alien was a deliberately paced tour through an extraterrestrial haunted house.  Cameron, however, had something else in mind.  The Terminator revolutionized the sci-fi and action genres, arguably creating the truest hybrid of the two up until that point.  Cameron would now create a three way meld, with horror being the third component.  While the first third of Aliens is indeed relatively slow, once the space marines stumble upon the Xenomorphs nesting area, the emergency break is ripped out of its housing.  The film becomes a roller coaster careening out of control. Cameron takes the basic premise of Kurosawa’s The Hidden Fortress into darker waters than Lucas ever dared.

Like The Terminator, Aliens does take quite a few breathers in between gun blasts and acid splatters.  This time out, Ripley isn’t merely a protagonist, but the female incarnation of Rambo.  Well, maybe that’s not entirely accurate.  Ripley is not a meat eating super warrior who longs for combat, but a strong and determined woman who dons automatic weapons and ammo belts only when necessary.  Weaver, despite her tall and gangly appearance, brings femininity to the role.  She and Newt (Carrie Henn) form a Lone Wolf and Cub sort of bond.

Though the film was seen as a breakthrough at the time, fanboy revisionism has taken it’s toll in recent years.  Aliens is now seen as merely an unoriginal, though undeniably entertaining, concession to the militaristic blockbuster mentality of the 80’s.  Cameron supposedly eschewed the suspense and psychosexual subtext of the original for something deceptively lowest common denominator.  Such a reading of the film is both short sighted and indicative of a self-loathing fanboy contingent desperate to shed its stigma of immaturity.  Aliens is both deliberate and layered.  Those that wished for a mere continuation/elaboration of Ridley Scott’s take don’t understand that serious sci-fi need not be devoid of action, thrills, or convention to be noteworthy.

Made for 18 million dollars, Aliens went on to make 131 Million worldwide.  The budgets of Cameron’s films would increase exponentially over the next 23 years, as would the scope of his cinematic vision.  Sigourney Weaver would continue to stay in the good graces of both critics and peers for quite some time, but would always be synonymous with the role of Ellen Ripley.  The Alien franchise would have two more lackluster entries (four if you count the ill-conceived Aliens Vs. Predator films).  Ridley Scott is currently filming the prequel Prometheus which will hopefully be a return to form for the ultimate monster movie brand.  Still, it will be hard to top the shot of adrenaline administered by Cameron.  Happy Birthday, Ellen Ripley.