Throughout the 1990’s, A Tribe Called Quest established themselves as one of the most influential (if not biggest selling) rap groups ever.  They released a trio of classic albums that went a long way in shaping a non-stereotypical identity for Rap music.  Creative differences between members Q-Tip and Phife Dog would eventually tear the group apart as the latter’s struggle with diabetes exacted a hefty toll on his personal and professional life.  With Beats, Rhymes & Life: The Travels of a Tribe Called Quest, director and lifelong fan Michael Rapaport documents the rise, fall, and enduring legacy of four brothers travelling along a musical path. 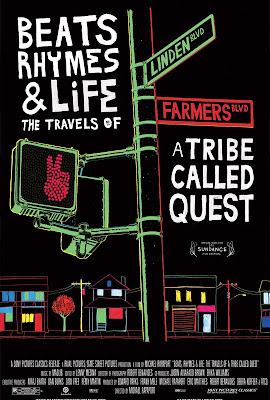 Aside from the occasional episodes of VH1’s Behind the Music and TV One’s Unsung, Hip-Hop’s heroes and pioneers very rarely get the royal treatment that documentarians bestow upon classic rockers.  Even then, the 44 minute long programs regularly shown on cable networks rarely do their subjects justice.  They are done by filmmakers that never manage to balance love and reverence with competent filmmaking.  Michael Rapaport, a seemingly unlikely candidate to immortalize a seminal rap group, has fashioned a touching cinematic love letter to his favorite rap group with Beats, Rhymes & Life: The Travels of a Tribe Called Quest.

Rapaport does not put a unique signature or visual stamp on the film.  He finds the dividing line between amateurishness and artistic pretense and walks it like a tightrope.  The grainy cinematography is reminiscent of the on location style of Yo! MTV Raps and Rap City.    It has an earthy feel that puts the Tribe on ground level with the viewer.  While their creativity is to be admired, they are not icons in the narrow sense.  They were just regular kids from Queens, basking if the rays of a fun and developing culture while not sacrificing their own individuality.  Rapaport uses the visual motifs of their album covers as both framing and connective tissue.  The primitively animated opening credits sequence is reminiscent of that from “I left My Wallet in El Segundo.”

The story of the Tribe is layed out in a simple and easily digestible fashion.  Jonathan Davis (aka Q-Tip), Malik Isaac Taylor (aka Phife Dawg), Ali Shaheed Muhammad, and Jarobi White came together under the banner of the Native Tongues collective.  Tip and Phife met as children.  Over the course of eight years they released five albums, the first three of which helped to fashion conscious Hip-Hop as well the backpacker movement.  Tip emerges as the chief creative force behind the group, while Phife harbors growing resentment at his perceived sidekick status.  Phife’s health issues exacerbate the problems and possibly affect his judgment and perception.  During a short lived reunion on the Rock the Bells tour, things come to an ugly head.

This is perhaps the portion of the film that caused Q-Tip to withdraw his support.  Having watched the film, his concerns are unfounded.  The ongoing conflict between him and Phife is portrayed in a way that makes them both seem endearingly human, which is exactly the vibe that emanates from the very best of Tribes music.  Rapaport strips away the vulgar, soap opera aspects that are typically associated with rap beefs to reveal something far more tragic.  While music can be a unifying force that brings friends closer, the business side can often be both corrosive and divisive.  Phife’s struggle with diabetes is disarmingly moving and provides the heart of the film.

The only oversight (if it can be called that) is that Beats, Rhymes & Life: The Travels of a Tribe Called Quest never offers ample insight into Tribes creative process.  The creation of albums like Low End Theory and Midnight Marauders is a vital part of their legacy.  Nonetheless, Michael Rapaport pays proper tribute to this landmark group.  His love for their music and message are in every frame.  That is what ultimately resonates with the viewer, not the volatile flare-ups between members.  Q-Tip needs to bestow his blessing upon it and be proud.  The Love Movement he started 21 years ago is still going strong.
Posted by Unknown at 6:24 PM