Steve Rogers (Chris Evans) is a humble, patriotic kid from Brooklyn.  He wants nothing more than serve his country in World War II.  Alas, he is a frail and sickly youth whose attempts to enlist in the United Stated armed forces have been unsuccessful.  His fortunes change when he attends the Modern Marvels of Tomorrow Exhibition with his friend Bucky (Sebastian Stan).  While there, he makes one final attempt to enlist at a recruitment center.  He then makes the acquaintance of Bavarian scientist Dr. Abraham Erksine (Stanley Tucci). 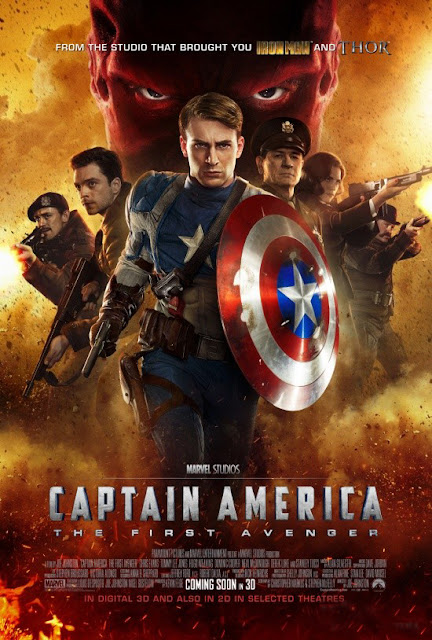 Erksine admires Rogers’s conviction and offers him the opportunity of a lifetime.  Rogers will be able to live out his dream if he submits to Project Rebirth, a massive experiment that will bless him with the physical attributes necessary to be a “super soldier.”  The experiment is a success, and Rogers is reborn as Captain America.  He soon engages the terrorist organization known as Hydra.  Hydra’s leader, The dreaded Red Skull (Hugo Weaving), has found an amazing new power source that he intends use in his campaign of world domination.

Captain America: The First Avenger is very similar to director Joe Johnston’s earlier cult favorite The Rocketeer in that it is an unapologetic love letter to an era long since passed.   It is not merely a tribute piece, as it would likely be right at home being made and released in the very time period it pays homage to.  Jhonston, who began his career as a special effects technician and evolved throughout the past few decades into precise if somewhat indistinct filmmaker, has crafted precisely the kind of superhero film that fans expected.  Captain America moves to the beat of its own patriotic drum, seemingly unaware of just how dated it is.  Therein lies its goofy charm.

Every frame of the film emanates the feel of the iconic recruitment posters of the era.  The crispness of the images is obscured by a dreamlike blurry haze that enraptures everything like a thick fog.  The costumes, sets, and hairstyles also add to this effect.  Johnston doesn’t so much accurately recreate the 1940’s as he presents an idealized dream version of it.  Everything feels immaculately clean.  Not in an antiseptic sort of way, but like something that feels as though it has been endlessly groomed and manicured.  The preciseness of the images recalls a time when everything was clear cut and obvious to the populace.

In contrast to current trends, the action is straight forward and basic.  There’s not a stitch of MMA choreography to be found.  The characters do not execute tactics with the grace and speed of modern martial artists.  Everything is in line with the gangster movies, war films, and adventure serials of old.  Cap strikes a number of iconic poses in the midst of the action that could easily be frames of an old Jack Kirby comic.  The obvious silliness of cap using his shield as boomerang-like weapon is not explained away in Nolan-like fashion.  It’s a part of the characters image, and as such it is presented without shame.

The middle act of the film tantalizingly deals with the idea of war time propaganda.  The government plays to the naïve youthful idealism of its teenage population.  Those who prove exceptional become tools of propaganda themselves, rather than being allowed to actually join in the fight.  Captain America introduces this theme in an amusing montage of stage performances in which Rogers travels the country in order to convince his fellow Americans to invest in war bonds and the like.  Just when things get interesting, the movie switches back to standard superhero mode.  This isn’t necessarily a bad thing, but it does feel a bit anticlimactic.

Captain America: The First Avenger is perhaps exactly the kind of film it should be.  It offers its quaint little message in as straight faced a manner as possible, and actually seems to believe in the ideals it purports.  That kind of sincerity is sorely missed in the current era.  While it is admittedly appealing, it also holds the movie back from really being the colorful, thinking man’s adventure that it could have been.  Still, Cap stands out from his Marvel Studios brethren in an unexpectedly astute way.  Hokey as he is, I actually like the guy, and would gladly follow him into battle for a sequel or two.