As computer animated features become more varied in terms of subject matter, some truly bizarre offerings will start popping up on multiplex screens.  One such oddity is the upcoming adaptation of Eric Powell’s Dark Horse Comics series The Goon.  The title character is a hulking brute who poses as a mob enforcer.  He and his pal Franky go about town busting heads and collecting debts.   Together, they fight off zombie hordes, occult priests with supernatural powers, and mobsters who’ve risen from the grave. 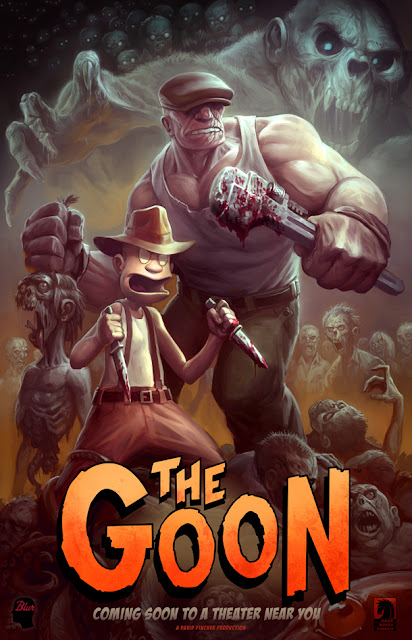 The Goon is being brought to computer animated life by Blur Studios and producer David Fincher.  It’s written by creator Eric Powell and features the vocal talents of Paul Giammati as the Goon and Clancy Brown as the Franky.  A two and half minute scene recently surfaced over at Live Leak.  It displays the same of sort of tongue-in-cheek absurdity prevalent in Mike Mignola’s Hellboy, another notable Dark Horse title and film franchise.  I like the gangster movie/depression era setting and banter.  The character designs are a direct facsimile of those from the comic.  I don’t really know what to make of it all, but it does seem morbidly interesting at the very least.