Two rival Chinese clans face off against each other in ten rounds of combat.  The victors will be proclaimed rulers of the martial world.  Chief Hong, who presides over the losing clan, refuses to accept defeat.  He enlists the help of a ninja clan headed up by Kembuchi Muduo (Chen Hui Min), who in turn issues a challenge to the champions.  The victorious school answers by sending out eight heroic warriors, who are massacred when faced with the deadly “five elements” formation.  The ninja clan then proceeds to overrun their compound, slaughtering everyone inside save for Hsiao Tien Hao (Cheng Tien Chi).  Hsiao escapes, and finds shelter with an aging martial arts master who has studied Ninjutsu.  This elder warrior schools Hsiao and three others in the dark arts.  They then use this newly acquired skillset to exact vengeance on Kembuchi and his ninja clan. 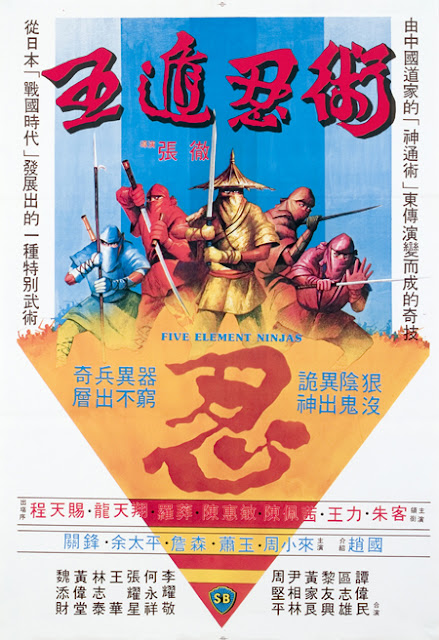 The cinema of Chang Cheh was a surrealistic nightmare that somehow always ended up being more fun than scary.  He gleefully festooned the guts of his protagonists from one end of the frame to the other.  As his prolific tenure at the venerable Shaw Brothers studios drew to a close, he made what is arguably his most fun and watchable film: Five Element Ninjas, otherwise known in the states as Chinese Super Ninjas.  The film is a triumph of imagination that overcomes its own obviously limited resources.

Chang Cheh uses a variety of visual techniques to create an air of unreality.  The two set pieces focusing on the wood element are perhaps the best example of this.  Both times, a group of ninja use trees to camouflage themselves as they slice their opponents to ribbons with fierce weaponry.  The first scene uses the most obvious sort of wirework.  In one instance, a ninja jumps out from behind a tree.  He pauses above the frame in mid-air, with only his Shuko (ninja climbing claws) visible at the top of the frame and bared like raccoon claws.  It is both glaring and hilarious.

Other primitive tricks are employed as well.  During the first encounter with the fire element, one red clad ninja performs an impossible forward leap and flip onto an elevated precipice.  His back turned to his opponents, he then turns his head.  The head turn, as well the downright creepy grace of the stunt, give away that fact that it was all achieved by playing the footage in reverse.  Instead of inspiring laughter or derision, it makes the viewer feel as though they are in some sort of perverted funhouse.

Another cartoony touch is how corresponding Chinese characters appear onscreen to describe a specific character name, weapon, tactic, or technique.  Many American viewers (myself included) have become familiar with this technique from Japanese manga, anime, and video games.  The use of it in Five Element Ninjas firmly places the film in superhero/comic book territory, making it one of the earliest examples of a uniquely Asian approach to such material.

Chang Cheh’s use of violence has never been more outlandish than it is here.  Heroes continue to fight after suffering all manner of injuries, taking several minutes to finally succumb to their wounds.  One character continues to engage the enemy as his intestines slowly seep out of stab wound to his perineum.  He steps on them and slips, allowing the villain to deliver the finishing move.  Our poor hero then begins a slow motion dance of death that even Peckinpah wouldn’t have the audacity to try and pull off.  That moment is a definite highlight, but hardly the only grisly pay off the film has in store for hardy viewers.  The fight choreography also feels a bit faster and more intense (all due respect to George Lucas) than that of previous “Venoms” films.

Five Element Ninjas is perhaps the most complete and satisfying cinematic comic book ever released by Shaw Brothers Studios.  That may read like a bold statement to the uninitiated, but anyone who has seen the film can attest to it.  It looks and moves differently than anything else in Chang’s filmography.  It has the vibrancy and melodrama of the best Saturday morning cartoons.  It’s the kind of film that makes one long for the twilight years of the Shaws again.  That brief period may not mean much to the cineastes of the world, but it yielded undeniable gems like Five Element Ninjas.