The Dark Knight Rises will undoubtedly rule the summer of 2012. To what degree it will rule the worldwide box office is anyone’s guess, but one thing is for sure: Fans like me are dying to see even a smidgeon of footage.  The teaser trailer will debut in front of Harry Potter and the Deathly Hallows: Part II this Friday.  Until then, the viral campaign for the film continues to unfold with the official teaser poster. 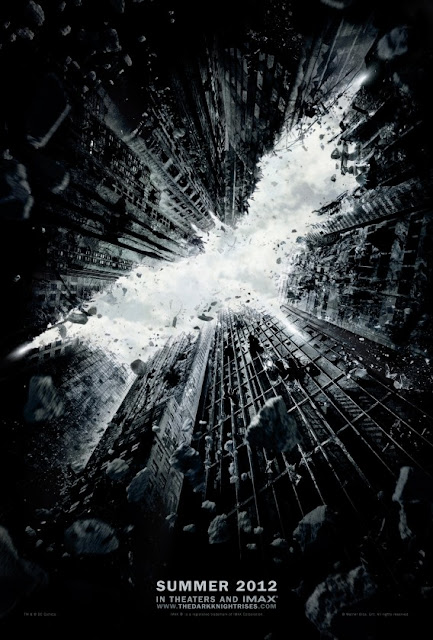 The view of the image is from the ground upward, as though a camera was stationed on dead center in midtown Gotham and pointed toward the sky.  Skyscrapers erupt from the ground on all sides, as if on a mission to blot out the sun.  As they reach for the heavens, the top of each building joins together and creates the image of the Bat signal against the sky.  Rubble is seen falling from each structure.

Christopher Nolan clearly can’t shake the ghost of his last summers Inception.  The posters for that film reflected it’s penchant for doing weird things with buildings and architecture.  Could this mean that the third and final Nolan directed Batman film will be a mind game of epic proportions?  Who knows, but this poster does its job well.  It incorporates an iconic emblem in a way that is equal parts recognizable, striking, and creative.

That Nolan demands the Warner Brothers marketing department to maintain such a high standard while respecting his vision speaks well for the film itself.  It’s not like the general public actually has to be sold on it at this point.  The Dark Knight Rises probably will not equal or surpass the massive box office haul of The Dark Knight (that film was a perfect storm of epic proportions that can’t easily be replicated), but it will definitely be an event film in its own right.  Carry on, Mr. Nolan.
Posted by Unknown at 9:34 AM