After willfully ignoring the bootlegged version that leaked and refusing to sit through another epic length Harry Potter flick at the multiplex, my patience was finally rewarded.  The teaser for The Dark Knight Rises surfaced online today.  Since the film hasn’t actually been shooting for that long, I wasn’t expecting much in the way of “money shots” or iconic images, but I was expecting something to stoke the fires of my anticipation.  Well, something is exactly what I got, though I’m not sure it was worth enduring all of the hype that preceded it. 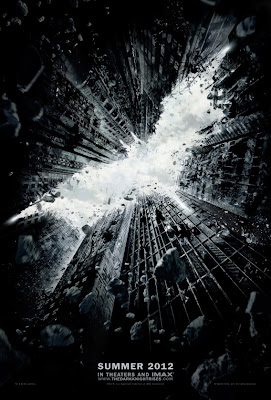 The trailer starts out ominously, with recycled footage from the two previous Batman films.  They are juxtaposed with footage of the camera rapidly ascending alongside obvious CGI walls, with ominous words flashing briefly onscreen.  We see familiar shots from Batman Begins: one of Bruce trekking across the mountainous terrain leading to Ra's al Ghul’s (Liam Neeson) Tibetan fortress, the other of Bruce conquering his childhood fears in the soon to be excavated batcave.  There is foreboding voice over by Liam Neeson that is actually a monologue from Batman Begins.

After that lengthy preamble, the first bit of footage from The Dark Knight Rises is revealed: Commissioner Jim Gordon (Gary Oldman) lying in a hospital bed, pulling a breathing apparatus away from his mouth to deliver a speech to an off-screen Bruce Wayne (Christian Bale).  Someone is shown climbing out of an endless well.  There is a shot of Bane (Tom Hardy) performing push-ups, and another of his mask glowering into the camera.  The shot of the CGI buildings transitions into the image from the teaser poster.  Just after the titles appear onscreen, the “money shot” arrives: an exasperated Batman facing off against a hulking opponent who rises slowly in the foreground.

What does this all mean?  For one, it means that either Nolan doesn’t have enough footage for a trailer yet, or he is willfully holding back so as not to spoil any of the “surprises” he has in store.  I’d say it’s a little of both.  It also means that the dark and foreboding tone of the last two entries will not only be maintained but perhaps intensified.  Nothing here looks particularly hopeful, as Gordon is either in Ill Health or severely injured.  He is also begging for Batman’s help.  Then there is the Rocky IV style shot of Batman huffing and puffing as he raises his dukes to confront whoever or whatever it is that’s rising in the foreground.  Startlingly, Bats seem apprehensive.  He’s actually backing away.  Could this be the moment where we see the “breaking” of Batman?  And who or what is that figure in the left hand corner of the far background of the frame?

Truth be told, this is a rather unremarkable teaser.  There are no surprises, and it doesn’t set the audience up for anything that it wasn’t already expecting.  When all is said and done, it announces the coming of another Batman film.  The main thing that makes this teaser worthwhile is that brief and breathless moment at the end, which effectively sets up Bane as Ivan Drago to Batman’s Rocky Balboa.  What makes it all the more startling is the lack of an epic look.  It’s a medium shot that could have come out of your average boxing flick.  The chanting on the soundtrack gives it an air of finality, as if something important and inevitable is taking place. Everyone will have to wait for the full trailer to get a real taste of Nolan’s vision, but for now we can all just rewind and watch those last few seconds to our hearts content.