The last decade and change have not been overly kind to the legend and legacy of Frank Miller.  Both of His new millennium endeavors involving the caped crusader have proven to be nonsensical and extraneous.    The highly anticipated The Dark Knight Strikes Again was the graphic novel equivalent of Star Wars Episode I: The Phantom Menace.  All-Star Batman & Robin The Boy Wonder somehow managed to be even worse.  To add insult to injury, the poor reception of DK2 seemed to spark a collective reconsideration of Millers entire catalogue among fandom, with many now viewing it as mildly diverting yet childish and derivative.  Cinematic versions of Sin City and 300 offered Miller a rebirth of sorts, but that momentum was quickly stalled by his ill-conceived adaptation of Will Eisner’s The Spirit. 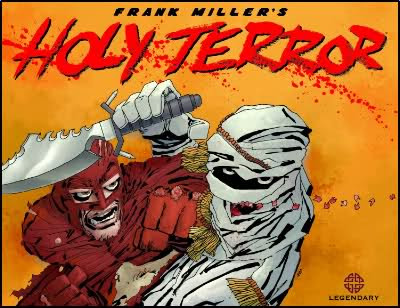 Now would be as good a time as any for another original work from the maestro to get things back on track.  While Millers upcoming graphic novel Holy Terror isn’t exactly a departure from his usual fare, it does offer the world a brand new superhero in “The Fixer.”  Well, he isn’t exactly new.  Actually, he is more than a little reminiscent of the middle aged and psychologically disturbed Batman from The Dark Knight Returns.  In fact, the idea for Holy Terror was originally conceived ten years ago as a Batman story entitled Holy Terror, Batman.  In it, The Dark Knight would tackle terrorists in a post 9/11 America.  Miller has salvaged the basic concept sans the caped and cowled one.  Legendary Comics has just released a full trailer that promises gunfights and bloodshed galore.  Miller’s penchant “rough and sketchy” art style is clearly alive and well.  Despite the whining of fanboys everywhere, he seemingly has no intentions of evolving or changing course at this point in his career.  Whether that’s a good or bad thing remains to be seen.  Either way, Holy Terror will be available everywhere on September 14th.