After the last particularly tense meeting with Gus, Walter (Bryan Cranston) takes the necessary precautions and prepares for what he sees as the inevitable.  Jesse (Aaron Paul) continues to nurse the pangs of guilt with women, whine, and song.  Of course, he supplements that therapeutic concoction with lines of crystal meth.  Hank (Dean Norris) buries himself in a new found obsession with minerals to cope with his feelings of helplessness while his wife (Betsy Brandt) struggles to find a way to connect with him.  Skyler (Anna Gunn) continues trying to assert control of Walter’s criminal endeavors any way she knows how. 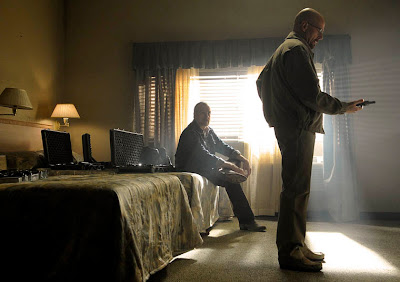 These week, the characters of Breaking Bad struggle to keep both demons and loved ones at bay.  The demons come in a variety of forms: guilt, self-loathing, fear, and weakness.  The methods of keeping them at bay range from various vices to weapons and emotional distancing.  Friends and family are also kept outside of the perimeter for reasons that are simultaneously noble and self-serving.  Again, there are many ways of doing this.  The pitiful and pathetic characters of this show wish to be left alone to do battle with their demons because they don’t want any of the casualties to hit too close to home.

Walter continues to play the role of provider while trying to shield himself and his family from the consequences of his often rash actions.  Mike (Jonathan Banks) warns him away at the last moment.  He pursues an unwise course of action against Gus as a preemptive measure.  Jesse’s secrets come to light and ruin his current relationship, but he does not struggle against the consequences.  Instead, he wishes for his lover to get as far away from him as possible for her own safety and sanity.  Hank, not wanting his wife to see him as an invalid, bonds with his physical therapist but keeps her far away.  Walter’s attempts to bond and team up with Mike yield similar results to Marie’s attempts to bond with Hank.

“Thirty-Eight Snub” is an episode where the fat is trimmed to nonexistent levels.  It may seem like mere filler to those who impatiently wait for “something to happen” but it actually develops some very important aspects of these characters.  Every action they take seems to isolate them, leaving them to stew in their own misery.  Guilt and fear often serve as inadequate motivators, leading to more horrible decisions being made.  A personal Hell is one in which someone remains trapped in an inescapable prison of their own design.  This episode pushes that point home in a big way.  The final moments before the end credits are perhaps the loneliest of the show so far.