The kingdom of Thundera has long enjoyed dominion over third earth.  Likewise, the Thundercats have long been at the top of the planets food chain.  King Claudius (Larry Kenney) rules with a sure and steady hand.  He one day hopes for his youngest son, Lion-O (Will Friedle), to take his rightful place on the throne.  Alas, the cub has other things on his mind.  Claudius’s adoptive son Tygra (Matthew Mercer) appears to be better suited to wear the crown.  During a celebration in honor of the returning warrior Grune the Destroyer (Clancy Brown), lizards launch an all-out attack on Thundera.  The kingdom’s inhabitants find themselves ill prepared for the onslaught and its orchestrator, Mumm-Ra (Robin Atkins Downes).  Young Lion-O finds himself confronted with the defining moment of his life.  Will he prove himself worthy of the crown? 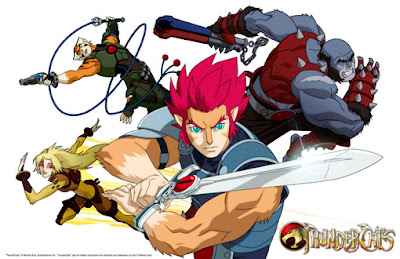 Thundercats is a reboot of the classic syndicated cartoon.  Like other properties of its time, Thundercats was conceived to sell a line of toys.  It did its job well, and remains of the more memorable shows of that particular era.  This new version retains much of what made the original a hit.  The main characters and the setting are pretty much intact, with a few cosmetic alterations.  The story has been tweaked a bit to facilitate stronger themes and a better sense of continuity from episode to episode.  The aforementioned changes have resulted in a show that is much more thematically focused than the original series, yet still retains much of its charm.

The most apparent differences are in the character designs.  All of the characters in the original save for the females and children had uniform physiques save for the women and children.  In the new series, all of the Thundercats have distinct builds and costumes suited to their personalities and abilities. Lion-O’s age has been decelerated considerably.  He is no longer a well-muscled lad with the mind and maturity of a child, but a slender youth with angular features.  Snarf resembles a rodent or woodland creature.  He no longer speaks English, nor does he repeat his name in an obsessive and worrisome manner.  Jaga is an emaciated sage in the vein of Obi Won Kenobi or Gandalf.  Mumm-Ra is still a decrepit mummy, yet here his body has taken on the hunched physique of Quasimodo.

Studio 4°C has definitely left its signature on the series.  The efficient sensibilities of Japanese anime are apparent in how the resources are doled out and rationed throughout the episode.  The “important” moments are the ones that seem to receive a more lavish and detailed presentation.  The pace picks up during the action set pieces considerably, to the point where they almost feel speed-ramped.  This has a weird effect, as it makes the movements of the protagonists seem more sudden and cat-like.  This can be noticed most plainly in a scene where Lion-O is shown clawing his way up a giant plant.

Thematically, Thundercats is considerably heavier than its predecessor.  It tackles such well-worn genre concepts as magic vs. technology, as well as the importance of tolerance and mercy in times of war.  The latter is particularly interesting considering the one sided, militaristic bend of 80’s cartoons.  In the original Thundercats, Mumm-Ra and the mutants were merely snarling, slobbering antagonists.  There was nothing sympathetic about them.  In this new version, things are a bit more ambiguous.  A clear arrogance is shown in Claudius’ attitude towards the other species of third earth.  Their also appears to be a hierarchy which the Thundercats sit comfortably at the top of.  While the series is still clearly action driven, it’s just weighty enough to be engaging.

With its hour long premiere, this new iteration of Thundercats hits the ground running at full speed.  Lion-O and company seem to have an actual purpose this time out that goes beyond mere existence and survival.  The assembly line feel that emanated from syndicated cartoons of the 1980’s isn’t so obvious here.  This series grabs the viewer right from the outset, and that’s a rare thing.  Even some of the best cartoon shows usually take a few episodes to build up the necessary momentum.  Within the span of the 44 minutes, Thundercats manages to find its sweet spot.  Hopefully, it can maintain and increase its pace on the way to the way to the finish line.