Still brooding over the humiliation he suffered at the hands of Zho, J. (Mark P. Hawthorne) is encouraged by his cousin Ox (Chyna McCoy) to take drastic measures in dealing with the situation.  J. goes along reluctantly, fully realizing that such actions are completely out of character for him.  Elsewhere, Rhyis (Amin Joseph) gives Grimm (Sean Riggs) a grisly task to complete. 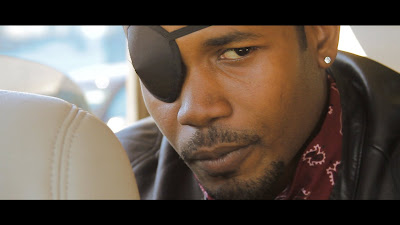 The third episode of Touye Pwen, “Dead To Rights,” revolves around a most troublesome question: Just how should disrespect and slights be handled?  Should they be answered in kind, or is an overreaction always the best reaction?  Even those who have been following Touye Pwen up until this point may be startled at the answer this episode offers to such questions.

Yet again, the episode is split between two different sets of characters having two different conversations.  Both feature men who are being ordered or coerced into violent action.  Grimm realizes the absurdity of what he’s asked to do, but goes about his task like a good soldier.  He’s clearly adept at doling brutal punishment.  J, on the other hand, exhibits the kind of cold feet that mark him as being a liability to any criminal enterprise.  Nonetheless, Ox sees the situation at hand as a necessary rite of passage that his cousin must endure.

The exchange between J. and Ox addresses an interesting and perhaps little known truth of the underworld:  The arrogant tendency that New Yorkers have of underestimating the competition when setting up shop out of town.  Such oversights can prove costly indeed (just ask Alpo or Wayne Perry).  It will be interesting to see if Zho’s hubris will bring about a harsh lesson for him and the rest of the Strap Set.

Then there is the matter of the little disclaimer that appears before the opening credits sequence.  I had been warned in advance about this by R.L. Scott himself, so I was a bit anxious about what to expect.   There is a bit of knife fighting that precedes the moment in question and acts as a sort of warm up for what is to come.  The sound of blades piercing flesh is excruciating and distinct.  The coup de grace is a bit of maiming that is accompanied by tender encouragement on the part of the torturer (Certain characters in Touye Pwen have an odd penchant for speaking tenderly to their victims as they torment them.)

Figurative emasculation and abhorrent rites of passage provide the thematic foundation of “Dead To Rights.”  This is easily the most unpleasant episode of Touye Pwen yet, and fittingly so.  Only a true sociopath would relish what Grimm is asked to do.  While I wouldn’t quite describe Grimm as a sociopath, it takes a certain kind of man to do what he does before the close of this episode.