Detective Ash (Said Faraj) pays Zho (Tracey Dukes) a visit.  During the less than friendly Rendezvous, Ash reminds Zho of the important task he has been charged with.  Mere moments later, Ash pulls rank on his young partner (Orion Solarion) to keep him in line.  Ash struggles to keep things together as the youthful inexperience and emotional instability surrounding him threatens to tear it all apart. 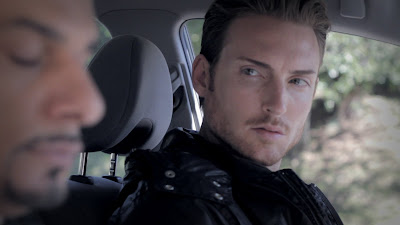 Secret lives and the masks one wears to maintain them and keep them hidden from each other are the main theme in this week’s episode of Touye Pwen.  All of these characters are carrying on an elaborate performance for one another.  They live in a world where wearing your feelings and/or intentions on your sleeve can prove fatal.  Whether providing orders and motivation to an underling or issuing a threat to an enemy, your mask must remain intact.  If not, your weakness will shine brightly through it’s cracks.

“In Too Deep” is the title for this episode.  It’s an interesting choice for a number of reasons.  It actually clues viewers in to the content of the episode, which contains an earth shattering revelation about the Zho.  That could be seen as a telegraphed punch on the part of writer/director R.L. Scott, but I’d like to think of it as R.L. Scott paying homage to modern police procedurals and hood flicks.

Allow me to offer a bit of context for the uninitiated.  In Too Deep happens to be the title of a 1999 film starring Omar Epps and L.L. Cool J.  This episode of Touye Pwen tells a very similar story in a markedly different way.  R.L. Scott’s version is a bit less straight forward and more naturalistic, prompting the viewer to fill in a few blanks.

From a character standpoint, there are a few tell-tale signs as to how Zho has been holding up since his release.  His physical appearance is disheveled.  It’s clearly been a while since he’s seen a barber.  It also looks as though he’s put on a few pounds since the second episode.  Bags are visible beneath his eyes, and he is clearly less confident than during his hallway encounter with J.   All of the aforementioned are clear signs of stress and possibly depression.   I’m guessing that this is a side of Zho’s character that fellow Strap Set members have never seen.  Yet he reveals it to someone that treats him like a pawn and clearly doesn’t have his best interests at heart.

Detective Ash also reveals another layer to his already questionable character.  During an exchange with Poge that takes place mere minutes after the one with Zho, Ash compels his partner to keep quiet and follow the program.  For a brief moment, a paternal instinct seems to kick in.  This is in sharp contrast to Ash’s demeanor just moments prior, when the clear signs of stress that manifested in Zho’s appearance didn’t seem to register with him.  This could be the sign of a character who struggles to keep his humanity buried beneath the gruff exterior of a hard boiled cop, lest the internal conflict drive him insane.

A number of paradoxes exist within the worlds of both law enforcement and organized crime.  Blood oaths are taken to gain access and membership to certain tribes, but the requisite codes of honor are only upheld so long as they remain convenient for all those involved.  Resentments remain hidden, only to reveal themselves in the form of betrayal and violent retribution.  Cops and crooks seem to have a whole lot hanging over both of their heads.  Thank God for civilian life.