‘Chaos Cinema’ is a Scathing Indictment of Modern Filmmaking Techniques

I spend a lot of time on this blog harping on how ineptly modern action scenes are filmed and edited.  Of course, I’m neither the first nor the only blogger to voice my displeasure at such things.  Film critics and industry professionals alike have also lamented the visual incoherence on display in today’s blockbusters.  Yet, it remains the style of choice for today’s action filmmakers.  Perhaps this is because there hasn’t been a loud enough outcry from the masses, something that points out the obvious in such a way where the truth is undeniable. 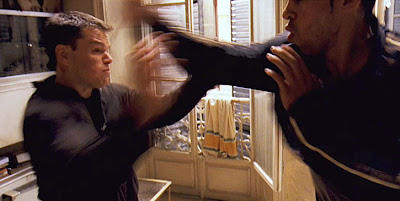 Matthias Stork has taken it upon himself to put together video essay that vents the collective frustration of action fans everywhere.  Chaos Cinema is a dead on analysis of how the “Shaky Cam” approach has caused modern cinema to devolve into disorganized spectacle.  It assembles a veritable highlight reel of damning evidence against some of the most notable offenders.   The works of Micheal Bay, Tony Scott, Paul Greengrass and Christopher Nolan are referenced multiple times.  However, Chaos Cinema isn’t a snark filled bitch fest.  Stork lays out a concise and detailed argument, showing why the modern approach proves effective despite its blatant disregard for the fundamentals of cinema.

Of particular interest is how Stork shows that sound effects have been made to do the heavy lifting when the action becomes too confusing.  Audiences have a Pavlovian response to onscreen chaos, even when it isn’t rendered in a comprehensible manner.  A film’s soundtrack can serve as a seeing-eye dog in such cases.  That is something of a contradiction when one considers the face that film is seen as a visual medium first and foremost.   This is perhaps the most eye opening segment of Chaos Cinema.

Chaos Cinema is a one of the best film related video essays I’ve seen in quite a while.  It will infuse action junkies and film buffs alike with a sense of vindication.  However, it’s doubtful that Hollywood will take note and make the necessary changes.  As long as movies like Transformers: Dark of the Moon continue to make billions at the worldwide box office, chaos will indeed rule.  No need for taut technical exercises when a noisy car of an action flick will suffice.

A very special thanks to Devin Faraci over at Badass Digest for bringing my attention to this amazing work!

Chaos Cinema Part 2 from Matthias Stork on Vimeo.
Posted by Unknown at 4:44 PM