Movie Review: Rise of the Planet of the Apes

Scientist Will Rodman (James Franco) is on the verge of a breakthrough that will change the course of human history.  He has been developing a genetically engineered retrovirus that may one day cure Alzheimer’s disease.  He has been using chimpanzees as his test subjects, one of whose offspring becomes the true beneficiary of the experimentation.  Will smuggles the baby chimp out of the facility and brings it home to closely observe his progress.  He names it Caesar (Andy Serkis) and treats it almost like a family member.  Caesar’s mental capacity expands at an exponential rate, as does his understanding of human behavior and his place in the earth’s pecking order.  When a violent mishap lands Caesar in a controlled environment where he is quarantined with other primates, the mutated chimp learns his true place in the world.  He will be the one who will places his kind at the top of earth’s food chain. 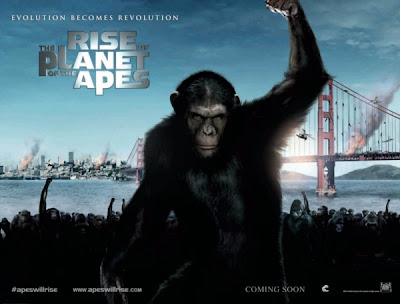 Rise of the Planet of the Apes is a reboot of the 20th Century fox’s 42 year old science fiction franchise.  It arrives exactly a decade after Tim Burton’s superficial debacle of remake, which placed fan enthusiasm at an all-time low at the time of its release.  As with so many wayward film series these days, Rise turns the clock back to the very beginning, serving as a prequel to events that audiences are already well familiar with.  Though 1974’s Conquest of the Planet of the Apes already covered that same ground, Rise looks at it through fresh eyes and with state of the art technology.  The film uses its underdog status to its advantage, emerging as one of the most sneakily effective (if not perfect) summer blockbusters in quite some time.

Relative unknown Rupert Wyatt does not cloak his vision in overt stylishness and personal signatures.  The cinematography, shot compositions and editing are no frills to the point of feeling pedestrian.  That’s not an insult by any means.  Unlike his immediate predecessor Tim Burton, Wyatt does not use a well-worn brand to elevate the profile of his visual sensibilities at the expense of story and character.  He isn’t trying to remind the audience of his auteur/visionary status.  He plays the role of a highly skilled and competent journeyman.  He realizes that this is Caesars story, and organizes the film to accommodate the origin and development of its lead character.

Wyatt’s adherence to the aforementioned discipline is perhaps a bit overzealous, to the detriment of the human characters in the story.  The same can be said for the screenplay by Rick Jaffa and Amanda Silver.  The subplot involving Will and his father (John Lithgow) provides credible and ample motivation for the scientist, but lacks the necessary dramatic punch.  Franco is aloof in a way that borders on outright disinterest at times, robbing key moments of the necessary gravitas.  The lovely Frieda Pinto is provided with a criminally underwritten character that exists only in the most perfunctory sense.  By the second act, all of the human elements and backstories have faded completely into the background.  To a degree that is not unwelcome, as Caesar is a thoroughly fascinating and relatable protagonist.

Caesar himself is a revelation in regards to the melding of human performance and visual effects.  The venerable Andy Serkis, now the official “go to” guy performance capture roles, plays Caesar with a sense of dignity and humanity.  He isn’t simply a successful mutation, but an intelligent and emotive sentient being.  Much of Serkis’s performance is done via miming and facial expressions.  Weta Digital provides the chimp’s highly detailed visage.  The illusion is seamless, though never quite photoreal.  It’s remarkable in its versatility and attention to detail.

Rise of the Plant of the Apes is not a perfect film, but its virtues tempt one to put it in that category regardless of its shortcomings.  It has a fully realized hero, and tells his story in the simplest and most affecting terms possible.  Had Rupert Wyatt and his screenwriting team took a bit more time fleshing out the human characters, Rise might’ve been a true classic instead of simply a very good though film.  It might just attain classic status in spite of its flaws, as Caesar is a character for the ages.  He represents the evolution of special effects technology as a story telling and character building tool instead of merely an end to itself.