Ghost Rider was one of the most indistinct and inconsequential superhero films of the last decade.  It managed a decent box office gross, but has since faded into the background while more the more notable films of the genre have maintained a high profile.  Nobody was clamoring for a sequel, but the powers that be have deemed the masses worthy of just such an honor.  Next February, Ghost Rider: Spirit of Vengeance will be roaring onto multiplex screens.  While this news might not set the world on fire, the guys behind this loose sequel are certainly of interest.  Mark Neveldine and Brian Taylor are the duo behind Jason Statham’s highly entertaining Crank films.  They have apparently added their manic touch to the saga of Johnny Blaze. 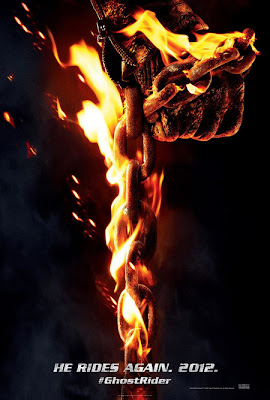 Ghost Rider: Spirit of Vengeance takes place a good while after the first film.  Johnny Blaze (Nicholas Cage) has exiled himself from the civilized world in order to protect humanity from the wrath of Ghost Rider.  While in no man’s land, he makes the acquaintance of Moreau (Idris Elba).  Moreau is a member of the monastic order of Michael, the warrior angel.  He hopes that Johnny Blaze will allow the spirit of Vengeance to watch over a mother and child who are being pursued mercilessly by Roarke.  Johnny Blaze is about to be embroiled in another apocalyptic showdown, whether he likes it or not.

The trailer begins with a dramatic reveal of Ghost Rider’s new character design.  His skull and leather duds are now charred beyond recognition.  He looks as though someone dosed him in oil and set him ablaze.  His chains are able to reduce his enemies to a pile of ashes.  The desert setting of the film borders on the post-apocalyptic.  There are even some satanic rituals thrown in for good measure.  From the exaggerated facial expressions in the extreme close-ups to the insane camera work, the presence of Neveldine and Taylor is evident right from the outset.  There is an extremely cool shot of Idris busting caps at a car while falling backwards a guard rail and off a cliff.  It’s almost enough to make one forget about the first film, assuming that anyone managed to remember it in the first place.

The Crank films generated enough good will to make Ghost Rider: Spirit of Vengeance worth a look.  The irreverent tone and approach of Mark Neveldine and Brian Taylor might be just the shot of adrenaline this bland franchise needs.  Of all the Marvel heroes that I wasn’t expecting to get a reboot, Ghost Rider was at the very top of that list.  Oh well.  Hollywood tried three times to bring the Punisher to life.  The results ranged from bad to mediocre each time (Though Punisher: War Zone was a pleasant surprise).  Maybe they can get Ghost Rider right on the second go around.  The question is, does the audience still care?
Posted by Unknown at 5:02 PM