While the proposed Luke Cage film languishes in development Hell, one hopeful after another vies for the title role.  The list of prospects seems to be growing by the day, with each actor bringing something unique to the table.  Back in May, Isaiah Mustafa made a bid for the part with a slick and stylish faux trailer.  Just last month, Eric Thomas Wilson followed suit.  His offering somehow slipped completely under my radar.  I discovered it this morning as the subject of a Facebook friend’s status update. 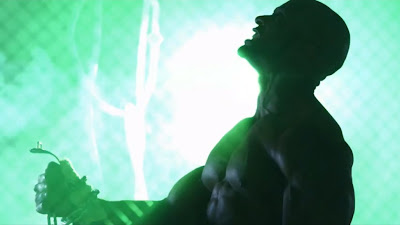 As the trailer opens, the camera slowly zooms in on a hulking figure brooding in a jail cell.  He sits in silent contemplation, and is the only thing in the shot that is illuminated.  An ominous, bass heavy voice over begins.  A right hand chained to the side railing of a gurney flexes and writhes in pain as green lights reflect off of it.  Bad guys are shown nursing drinks in a bar.

A correction officer and prison official administer a severe beating to an inmate.  The inmate is then strapped and chained to a gurney in preparation for some sort of experiment.  The cackling prison official intentionally sabotages the proceedings before assaulting the medical professional in charge.  In the wake of all the confusion, the test subject emerges transformed.

Luke Cage is then shown in a bar wearing a form fitting yellow T-Shirt and brandishing twin semi-automatics.  As his opponents open fire, the bullet’s ricochet from his torso.  They then make the mistake of confronting him hand to hand.  Luke makes short work of them.  He then picks up a cigar and surveys the damage.

Though Isaiah Mustafa’s take on the material has its merits, I found his physical presence to be lacking.  His slender build just wasn’t intimidating enough.  Eric Thomas Wilson exists more toward the opposite end of the spectrum. The image of him stewing in a jail cell perfectly communicates the idea of a caged Goliath.  It also works on thematic level.  Luke’s physicality isn’t the only thing that must be contained.  His inner rage seethes, begging to be set free.  The image works because Wilson simply has the physicality to sell it.  He doesn’t possess the gargantuan size of a bodybuilder.  His muscle is thankfully functional, making him more than believable in the requisite fight scenes.

The clip easily captures the ambience of a 1970’s Marvel comic.  The images in the final third of the trailer take their inspiration directly from the cover of the premiere issue of Luke Cage: Hero For Hire.  The color palette and the style of the lettering in the titles are perfect examples of this.  Now, the image of Wilson holding two guns crucifixion style is a bit cheesy.  The idea that his opponents would rush to engage him in fisticuffs after seeing his invincibility first hand is rather silly.  Still, it’s all somehow more engaging than Mustafa’s perhaps overly serious take on the character. 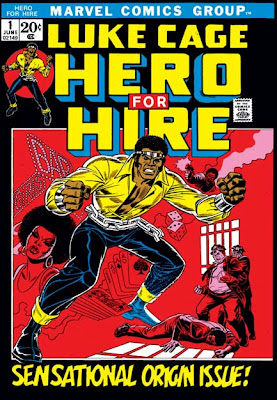 I think both Isaiah Mustafa and Eric Thomas Wilson offer worthwhile takes on the character.  Mustafa takes the material deadly serious and tailors it to contemporary tastes.  Wilson also shows it the proper respect, but allows a more tongue in cheek sensibility to creep in.  I suspect that the latter might make for a more fun and memorable film.  In the meantime, it seems that Luke Cage trailers have become a cottage industry.  If nothing else, they seem to be an effective showcase for new talent.