The breakdown of the trust between Walter and Gus results in a surveillance camera being installed in the lab.  It tracks and records Walter and Jesse’s every move.  Jesse’s house begins it’s descent from a 24 hour party spot to a rest haven for drug addicts and sexual exhibitionists.  Skyler relentlessly pursues her Car Wash idea.  Hank’s case of cabin fever reignites Marie’s Kleptomania as he reluctantly resumes investigative work from the confines of his bed. 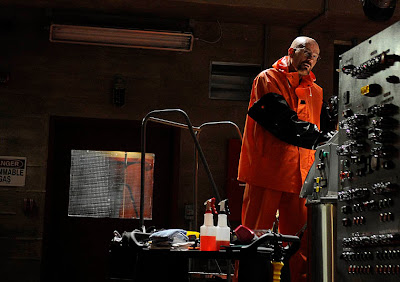 On this week’s episode of Breaking Bad, which is called “Open House,” home is most decidedly not where the heart is.  In fact, home is the most uninviting place imaginable for these characters.  It offers no rest or piece of mind, but contains constant reminders of one’s failures and sins.  That these characters have managed to make their own minds as unlivable as their own houses speaks volumes about their plight.

Walter’s apartment does not offer him a safe haven from his wife’s incessant badgering, nor does his status as a manufacturer of Crystal Meth.  Skyler’s insistence on lording over Walter’s money laundering scheme is almost offensive in his intrusiveness.  Even the lab, the place where Walter’s feels most comfortable, is no longer welcoming.  Thanks to the surveillance camera, big brother is always watching.  Walter, who constantly tries to keep everyone around him in the dark to some degree, now finds it impossible to ever truly be alone.

Jesse uses the nonstop racket of debauchery and extracurricular activities to drown out the noise in his head.  His house is now filled to the brim with drug addled fornicators, refuse, and loud music.  That’s precisely the way he wants it.  While most people prefer a home that is both quiet and clean, Jesse finds such a prospect horrifying.  His thoughts are too ghastly for him to be left alone with them for any amount of time.  He defiles the roof under which he lives in order to make it more comfortable.

Skyler has voluntarily become the resident home invader of Breaking Bad.  Her desire to impose her will knows no bounds.  It was never really Walter’s dishonesty or illegal activities that bothered her.  It was the loss of control, the sense that Walter had evolved beyond her expectations and gotten free of her leash.  He is no longer the docile yet highly intelligent mouse that she married.  She requires that his growth progress along a path that she determines.  Whether in marriage or divorce, she cannot afford to let Walter live his own life.

Hank and Marie have a sort of strange, symbiotic bond.  Hanks house has become a literal prison, his recovery period a prison sentence.  Severe injuries suffered in the line of duty have confined him to the very home that his job paid for.  He makes Marie feel uncomfortable in that home.  As a result, she seeks peace in the make believe domestic bliss of open houses.  She also relapses into lying and theft.

The metaphor of being unwelcome in one’s own home, and by extension being uncomfortable with oneself, is an interesting one.  The dissection of that metaphor throughout the duration of this episode is also interesting.  However, the uneventful nature of the past few episodes is making me get a little antsy.  The best part of Breaking Bad is the shocking twists and revelations that develop along the way.  They are sometimes violent, but they keep the shows blood pumping at a fast and steady rhythm.  Introspective and reflective episodes like “Open House” provide ample food for thought, but it’s time for a little more bloodshed.

“Open House” is an interesting, though only moderately entertaining episode of Breaking Bad.  It’s a distressing trip through these character’s guilt and angst ridden psyches, but it’s time for things to to bloody again.  The shows intriguing premise works best when the writers slowly but surely continue to turn up the volume.  The audience needs to be made to constantly feel afraid for Walter and Jesse.  Their maneuvering is what keeps Breaking Bad on its toes.