Lion-O and his companions make their way through the impenetrable foliage of the jungle.  Just within sight is the Tower of Omens.  The Thundercats press on, determined to acquire the prize that supposedly lies within.  Mumm-Ra also has designs on the fabled treasure that rests atop the tower.  As both parties will soon find out, recovering the legendary Book of Omens is not at all a simple task. 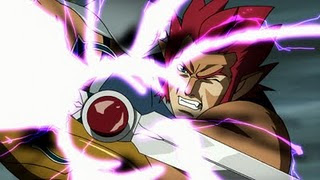 “Journey to the Tower of Omens” is yet another episode of Thundercats that pays tribute to the popular mythologies of modern times.  It’s also the fourth such episode this season (including the hour long premiere) that does not function in a formulaic and predictable fashion, relatively speaking.  As expected, there is a supposed moral that is examined and explained throughout the show’s running time.

This time out, Lion-O must learn to believe in himself and not merely trust in brute strength and weaponry.  In a divergence from the Star Wars blueprint, Lion-O is not quite as annoying or belligerent as Luke Skywalker was in The Empire Strikes Back.  He simply goes with the flow despite his impatience and frustration.  A curious moment shows him giving up on comrade rather easily during a crisis situation.  It’s logical under the circumstances, but Lion-O seems rather nonchalant about it all things considered.  Cheetara’s animal magnetism is humorously referenced twice, which is a nice surprise.  Characters in kid shows need not be completely neutered and asexual.

When the Thundercats enter the Tower of Omens, they must make their way past a series of traps, riddles, and puzzles.  This is of course reminiscent of the Indiana Jones films.  The musical accompaniment during said moments resembles the instantly recognizable work of John Williams in that the horns are very pronounced.  Of course, Lucas and Spielberg did not pioneer or develop such tropes, but they certainly played a big part in popularizing them to modern audiences.

The final act has Lion-O racing the winged Mumm-Ra up a staircase that spirals around a giant pillar.  It’s presented as a scenario where the hero’s efforts to overcome an obstacle are hindered by the interference of an opponent.  It plays exactly like a board on a video game.  There’s also a scene that plays almost exactly like the one in Return of the Jedi where The Emperor electrocutes Luke Skywalker with force lightning bolts.

“Journey to the Tower of Omens” is yet another satisfying episode in this brand new iteration of Thundercats.  It makes it clear that the series focus should remain on the core characters and leave the cutesy critters in the periphery if not jettison them altogether.  If the Thundercats absolutely must encounter other denizens of Third Earth, perhaps they should be envisioned as something other than a childish gimmick.  It’s now apparent that both “Ramlak Rising” and “Song of the Petalars” severely hindered the shows momentum.  Luckily the Thundercats have regained their footing and are sprinting toward to home stretch.