J (Mark P. Hawthorne) shows up at Leena’s (Jasmine Hester) doorstep unannounced to deliver a warning.  He questions her judgment and her loyalty, wondering how she could go along with her jailbird ex-boyfriend so willingly.  He informs her that Zho’s disrespect will not go unanswered, so it would be in her best interest to stay clear of him.  He also leaves her with a painful memento from the past. 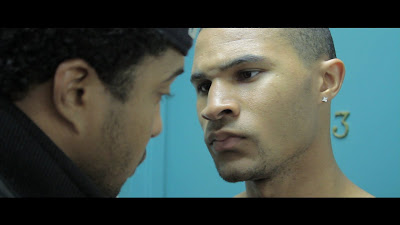 “Sins Remembered” is the shortest episode of Touye Pwen yet, and its title is completely self-explanatory.  The inability to forgive a perceived slight can land one in all sorts of turmoil.   The best option for J would’ve been to simply walk away from the situation and chalk the whole thing up as a loss.  Alas, he just he informed Ox of all that transpired.  Now, things have escalated beyond J’s control.  He struggles to step into the character he’s created for himself, though it’s clear to everyone else around him that he simply is not built for that particular role.

As it turns out, Zho isn’t the only one harboring deep and painful secrets.  J leaves Leena with a reminder of what could have been.  I doubt that Leena has informed Zho as to the extent of her relationship with J.  It is likely that she harbors feelings for both men at this point.  Unfortunately, J likely took himself out of the running by blinking first during his metaphorical staring contest with Zho.  That display of “weakness” probably cost him the battle.

My advice to J remains the same as it did at the close of the second episode: walk away.  Any woman that has to be won like a trophy in a prize fight isn’t worth the trouble, especially when the cost and likelihood of losing is so high.  “Sins Remembered” lasts half as long as a Looney Tunes short, and literally feels like a delivered telegram.  The news is decidedly bad, as is the entire situation.  The characters of Touye Pwen seem to exist amidst a sea of bad decisions and lack of foresight.  I get the suspicion that R.L. Scott is setting up a finishing blow of epic proportions.  Somebody isn’t walking away from this.