By the fall of 1991, rap music had a considerable number of classic albums under its belt.  Classic in the sense that said albums yielded multiple hits and contained far more good songs than bad.  Yet, the relatively young musical genre didn’t yet have anything in the way of a definitive long player, something that was an unmitigated, cohesive masterpiece from start to finish.  An album that perfectly fused two seemingly disparate forms of music together without sacrificing the core fundamentals of the younger and lesser regarded one.  One might’ve thought that such an innovation would come by way of Hip-Hop’s heavy hitters of the day.  Instead, it would come to being as a sophomore effort from relative second stringers. 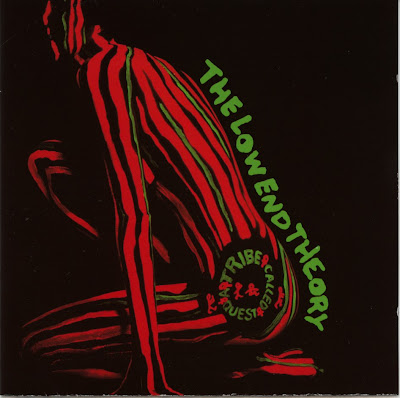 The Native Tongues collective were considered to be the artistic vanguard of east coast rap during the golden age of Hip-Hop.  They brought a sensibility that was considerably less stereotypical and threatening than that of their contemporaries, many of whom reveled in crack era chic or black militant posturing.  The Native Tongue movement was started in earnest by the Jungle Brothers, whose afrocentricity informed everything that came thereafter.  The abstract stylings of De La Soul gave the movement a bit of mainstream notoriety.  A Tribe Called Quest were the newest additions to the collective, but would go on to emerge as its most popular and endearing by far.

The group released their Jive/RCA debut People’s Instinctive Travels and the Paths of Rhythm in 1990.  It was undeniably strong, delivering standards such as the playfully sexual “Bonita Applebum,” and the catchy “Can I Kick It?”  The album left a mark, but The Tribe had yet to emerge from beneath the shadow of their Native Tongue Brethren.   Mere eccentricity wouldn’t be enough to make them stand out, since the Jungle Brothers and De La already had that in spades.  It seemed that while nodding their heads, fans were wondering just what made these four guys from Queens any different from the other guys in their respective clique.  Their second album, The Low End Theory, would emphatically answer that question.

In the early 1990’s, rappers began serious experimentation with Jazz fusion.  Many of these early efforts were way too obvious in their attempts.  The Low End Theory took a different approach.  It was both restrained and selective in regards to how it applied Jazz elements into its overall mix.  As the title suggested, the bottom heavy foundations of east coast boom bap still remained the primary focus.  Yet, the choice of samples created a groove that was seductively warm and intimate without sacrificing grit or street appeal.  This was achieved by making many of the songs veritable sample collages.  Each track strategically interpolated different elements from a number of preexisting compositions.

The album is perhaps best remembered for group members Q-Tip and Phife Dawg achieving a magical equilibrium with each other.  Their back and forth was impeccable.  The lead single “Check the Rhime” was a good example of their symbiosis, and offered a great preview of the group’s new found direction.  In fact, Each successive single showed a rap group that was growing by leaps and bounds, perfecting their craft with each step.  "Jazz (We've Got)" was a trippy and intoxicating offering that was also deceptively simple in its composition.  It’s hollow, murky sound somehow proved filling.  Last but certainly not least was "Scenario," a raucous posse cut that fiercely redefined just what that phrase meant.  It was the first of Busta Rhymes trademark lyrical finishing moves, and he undoubtedly scored a fatality on his first time out.

The Low End Theory was released on September 24th 1991.  From there it began a slow three and a half year crawl to platinum status.  Its slow burn reflected the gradual swelling of Tribes audience.  Their ascent was fueled not by sheer marketing muscle or hype, but by perseverance and persistence.  Though their recording careers technically began with People’s Instinctive Travels, their evolution as artists begins with The Low End Theory.  It made Hip-Hop that much more layered and accessible, begetting any number of tropes that the backpack contingent would go on to coopt wholesale.  Ironically, Tribe remains more relatable and earthy than any other Hip-Hop Bohemian could ever hope to be.  This album is a testament to that.