YouTube has become a veritable haven for the dregs of the stand-up comedy circuit.  Painfully unfunny stand-up routines that might have been relegated to BET’s ComicView back in the day have been converted into equally unfunny web content in the modern era.  However, a genuine talent can sometimes rise through the muck to offer something truly off beat and special.  Earlier this morning, a friend sent me a YouTube video titled Brotherly Love by Maurice Kain Carter.  It started off as the typical comedic webcam rant.  Somewhere along the way, things took a detour into the Twilight Zone.  5 minutes after clicking play, I emerged from the rather bizarre ride in a state of bemusement. 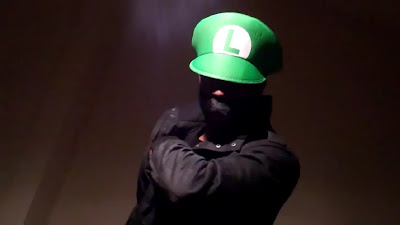 As it begins, Maurice offers a hilarious yet patently true observation: Many of the most popular video games of the eighties revolved around a hero having to save a seemingly ungrateful damsel in distress.  He then draws a parallel to all of the proverbial “Captain Save a Hoe” types who inhabit the real world.  He concludes that such experiences must have been the inspiration for classic video games like Super Mario Brothers.  The clip then suddenly detours into an imaginary scenario in which Mario finally refuses to answer Princess Peach Toadstool’s cries for help.

As Luigi suits up for yet another mission to rescue the fare maiden, Mario casually sits on the coach texting someone on his smart phone.  Luigi reminds Mario of duties.  Mario then informs Luigi that he has no designs on helping the princess, as her “Damsel in Distress” Routine has become tiresome.  Luigi spazzes out on his brother and decides to rescue the princess on his own.  Incensed, Mario pulls rank on Luigi, reminding him of his second banana status.  This proves to be the straw that breaks the camel’s back, as the situations soon escalates to violence.  Could this be the end of the most fruitful partnership in video game history?

The craziest thing about Brotherly love is how it switches gears at the halfway point.  The premise is already funny to begin with, but Maurice’s deadpan commentary brings the inherent silliness of the concept bubbling to the surface.  The hilarity reaches boiling point once the actual sketch starts.  Maurice plays both Luigi and Mario.  He sports a fake mustache that looks like it was fashioned out of shiny construction paper.  The thing is so thick that it covers his whole mouth.  His bottom lip is just barely visible when speaks.  The visual is so ridiculous as to be surreal.  Hearing the Mario brothers confer with each other via profanity and street slang is equally wild.  It’s at that point that things take a turn for the dark side.

An actual musical score suddenly appears and its volume gradually rises as the exchange between Mario and Luigi becomes more heated.  Things aren’t so funny anymore despite the outrageous production values and dialogue.  The sketch starts taking on the overtones of a melodramatic gangster epic. .  By the end, I was on the edge of my seat.  After the credits rolled, I laughed at myself for getting caught up in something so inherently silly.  I was convinced that the guy behind this thing had to be some sort of comic genius.

I had no idea who Maurice Kain Carter was before today, but as of right now I am officially checking for him.  His sense of humor is dark, and his insights are both warped and intriguing.  I don’t know what made him decide to take the Mario Brothers into such disturbing territory, but I am grateful nonetheless.  The best comedy often comes from applying real world logic to fantasy stories.  After all, why wouldn’t Mario get sick of doing the same thing over and over again with nothing to show for it?