Paddy Colon (Nick Nolte) returns home one night to find the brooding Tommy Riordan (Tom Hardy) nursing a drink on the front steps of his house.  Paddy’s estranged son soon sets his sights on competing in an MMA tournament.  He enlists his father’s help to train for the event, as it offers a multimillion dollar purse to the winner.  Meanwhile, Paddy’s other estranged son Brendan (Joel Edgerton) begins participating in MMA smokers to supplement his income.  He also decides to enter the tournament, as the winnings would go a long way in getting him out of the hole.  Old wounds are reopened as the Conlon men are suddenly thrust back into each other’s lives.  In the end, their differences will be settled in the octagon. 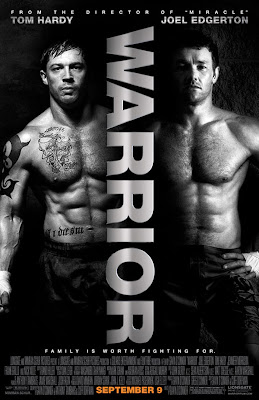 Warrior is perhaps the first “respectable” film to focus on the often maligned sport of mixed martial arts.  It comes with a considerable pedigree, featuring genuine talent both in front of and behind the camera.  The presence of the two lead actors alone is more than enough to distinguish it from it’s direct to DVD brethren.  It’s also much more accessible to general audiences as it has been tailored to fit very neatly into the conventional sports film mold.  It deviates from that tradition only in that it offers two underdog stories instead of one.  The above average execution of this material yields an overstuffed film that works in spite of continuously getting in its own way.

Similar to both The Fighter and The Town, Warrior takes place in a blue collar northeastern setting.  This puts the film in the same category (though not quite the same class) as Rocky.  Unlike that crowd pleasing classic, Warrior is shot in a modern style in which the camera seems to suffer from Parkinson’s disease.  It rarely remains steady, a tendency that becomes especially noticeable during the fight scenes.  The visual style is both a hindrance and an asset.  It makes the viewer feel as though they walk among these working class heroes, but it also renders the hard hitting choreography a bit hard to follow.

Unlike the B-Level productions aimed at martial arts fans, writer/director Gavin O'Connor does not want the audience to fawn over the choreography and seems to go out of his way to ensure that never happens.  He allows each bout to last only as long as is necessary to register a visceral impact.  Technically, this is smart filmmaking, as it allows character and story to take precedence over everything else.  However, his overenthusiasm in fudging the fights with jittery camerawork speaks to either indifference or incompetence.  Actually allowing the audience to see what is going on does not in any way sacrifice the basic fundamentals of storytelling.

The principle actors carry the film valiantly through its clunkier moments.  As Tommy Riordan, Tom Hardy is intimidation personified.  He exudes the pent up rage of a rabid pit bull.  During the tournament matches, his aura is almost overwhelming.  Even in the quiet dramatic moments, he seems on the edge lashing out lashing out emotionally.  The guy is simply a force of nature.  Joel Edgerton is the archetypal working class hero.  He is open and admirable where Hardy is hopelessly distant.  Together, both actors provide the film with a balanced emotional core.  They play tug of war with the audience, drawing the viewer in even when the plot machinations are less than believable. Nick Nolte offers a more sympathetic variation on the Jack Cates persona.  As obvious as it is, it undeniably works.

Warrior is a very strong example of genre filmmaking that would have benefitted from a bit of restraint on the part of its writer/director.  It’s as if Gavin O'Connor didn’t trust the basic story and felt the need to add needless embellishments.  This weighs the film down with melodramatic baggage that hampers an otherwise compelling drama.  Warrior ultimately succeeds on the strength of its lead actors and the unbridled brutality of the tournament fights.  The first truly great MMA film is still waiting to be made, but Warrior will do until it gets here.