There was a time when rappers were shockingly candid and outspoken, regularly incurring the wrath of politicians and right wingers on a regular basis.  By contrast, today’s rap stars avoid politically charged content like the plague.  Controversy may sell, but any artist that pushes the envelope too far risks forfeiting all that they have worked for.  In such a climate, the presence of an artist like David Banner is refreshing.  I’ve always respected his candor and passion.  That being said, I’ve never much cared for his musical output save for a few songs.  It is for that very reason that I find his new song and video “Swag” to be a shockingly pleasant surprise. 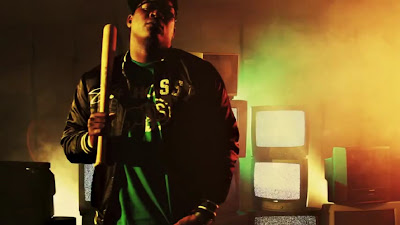 The title refers to the annoying slang term that has entered the Hip-Hop lexicon within the last five years or so.  Swag is short for swagger, which is obviously of paramount importance to the rap stars and fans of today.  Banner’s song is not a braggadocios anthem, but rather a bold condemnation.  The lyrics describe how just about anything goes in Hip-Hop’s current climate, as all manner of self-destructive behavior is laughably referred to as “Swag.”  He makes his case by way of a few obvious yet hard hitting observations.  He points out the Black community’s subserviently apathetic response to Kreayshawn’s use of the N-Word.  He also laments the sacrilegious imagery and content that today’s fans casually praise as witty.

Banner delivers his message in a clear and confrontational manner.  He doesn’t bury it in coded language and impenetrable verbosity.   Unlike many so called conscious rappers, he actually wants his message to connect with the listener sans any hindrances or obstacles.  To ensure that said connection smoothly takes place, he and co-producer Swiff-D have provided minimalist, bottom heavy musical accompaniment.  Sub woofers reverberate with a low fidelity rumble as 808 kicks are sustained into full distortion and beyond.  In true dirty south fashion, “Swag” is outfitted for car stereo enthusiasts.  Its visceral knock drives Banners point home.  It’s not the most elegant or colorful sonic backdrop imaginable, but it suitably shakes ones foundations enough to demand attention.

The video, directed by Jonathan Andrade, has alarmist overtones.  Banner is chained to a chair and tortured.  A child stands in front multiple television sets piled on top of each other.  News footage of police insurgencies and riots are flashed onscreen in a subliminal fashion.  At first, the young boy watching them appears to be taking it all in indiscriminately.  As the video progresses, he rejects the subversive messages being fed to him by removing his cardigan sweater and jewelry.  Banner’s sexy captors continue to brutalize him.   As his anger rises to a boiling point, the message becomes obvious.  Banner is Hip-Hop’s rebellious and truthful spirit being held captive by the keepers of the beast.  Bruised and battered, he refuses to give in.  As a result, his message finally resonates with the wayward youth.

“Swag” is unapologetic and forceful.  It is the latest and perhaps most robust example of Hip-Hop’s newly rejuvenated political and social consciousness.  This time, the message is not being delivered by an ineffectual bohemian or some bitter east coast snob with a New England accent.  That should make it a bit harder to dismiss in certain quarters.  Banner has always been quick to point out east coast bias and elitism.  He has also always made an effort to stay in touch with and accurately represent his constituency.    Hopefully “Swag” will ruffle a few feathers and raise a few eyebrows.  Banner deserves bulletproof respect for actually showing some balls in this tepid musical climate.