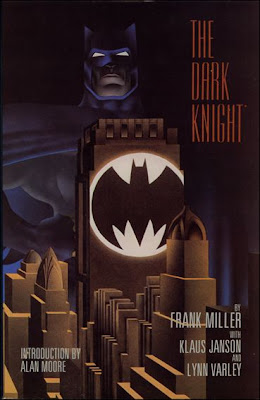 Batman: The Dark Knight Returns takes place sometime during the Reagan administration, though no exact date is given.  In the midst of his retirement from crime fighting, a 55 year-old Bruce Wayne grows restless.  His beloved Gotham is on the brink of anarchy, having fallen prey to a vicious new youth gang known only as the mutants.  The call of battle proves to be too much for the aging crime fighter to resist. He dons the cape and cowl once more.  His reemergence is given a less than enthusiastic reception by both the media and local law enforcement.  He reclaims the streets of Gotham with brutal force in spite of his ailing health and mental state.  When the reemergence of his oldest foe coincides with the beginning of world war three, Batman asserts ultimate authority.  Seeing him as a threat to its power, the United States government sends a powerful old friend to rein him in.

Batman: The Dark Knight Returns seemed to subscribe to a number of troubling yet intriguing notions.  The story paints fascism as a form of revolution.  The superheroes of yesteryear worked outside of the system in order to preserve and aid it.  As a result, they were embraced and celebrated as role models.  Superheroes in the classic sense have no place in modern day America as envisioned by Frank Miller.  Heroes such as Batman are persecuted by their governments.  In such an environment, simply being a superhero requires one to ultimately become a revolutionary.  Batman no longer seeks to preserve the system, but to destroy it and rebuild it in his own image, hence the mutant gang becoming “The Sons of Batman” by stories end. This ties in perfectly with Frank Miller’s reimagining of Batman as a caped and cowled “Dirty” Harry Callahan.

The story reflects and embraces the prevalent pop culture influences of its time.  Action films were in the midst of their very own “golden era” in the 1980’s.  Heavily muscled supermen such as John J. Rambo took on entire armies with high tech weaponry and guerilla tactics.  Miller responded to that trend by offering a highly militarized Batman with a freakishly overdeveloped physique.  He is shown as grey haired with a bulky, chiseled frame and a visage that resembles jagged rocks..  The Batmobile becomes a literal tank, spitting fireballs with a mere trigger pull.  This Batman employs sheer brute force just as much as stealth and/or strategy.  In fact, he revels in it.

Batman: The Dark Knight Returns was once considered somewhat in the same pantheon as Alan Moore’s Watchmen.   In the last decade or so, the latter has pulled ahead in terms of regard and prestige.  Moore’s take on superheroes is now considered the more mature and intelligent of the two by far.  However, Batman: The Dark Knight Returns continues to exert a considerable influence on how the caped crusader is portrayed in popular media.  Its undeniable stamp is all over the films of Tim Burton and Christopher Nolan, as well as Bruce Timm’s celebrated animated series.  Acclaimed though it may be, Watchmen’s heady and ponderous approach lacks the visceral kick of Miller’s apocalyptic vigilante fantasy.  Alan Moore sought to debunk and then eulogize the superhero.  Miller sought to transmogrify him.  Long live the Dark Knight!